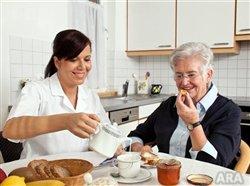 Americans are now living longer than ever before. In fact, one of the fastest growing segments is people over the age of 85 who will represent 20 percent of the population by the year 2040. Because we are living longer, certain conditions specific to senior citizens are also on a steady rise. Dehydration, falls, fractures, cognition loss and attention deficits are now becoming more commonplace.

In a recent paper titled “Salt Appetite Across Generations” presented at a medical conference in Switzerland, Israeli researchers from the University of Haifa confirmed that in older people, a reduced sense of thirst results in a greatly increased risk of serious dehydration. They also noted that the appetite for salt does not diminish with age and suggested that this be used to help sustain hydration and prevent the dangerous symptoms that result from dehydration.

Another study by Dr. Michael H. Alderman and Dr. Hillel W. Cohen of the Albert Einstein College of Medicine, published in the American Journal of Hypertension, identified significant risks to cardiovascular health and longevity from consuming any less than one or more than three teaspoons salt per day. Fortunately, most Americans – including the elderly – when left to their own choice consume right in the middle of this range.

Given this new evidence, assisted living caregivers should be very cautious before recommending a low-salt diet for the elderly. In older people, mild hyponatremia is the most common form of electrolyte imbalance in the blood. Indeed, several recent medical papers found a direct relationship between hyponatremia and unsteadiness, falls, bone fractures and attention deficits.

Falls are one of the most serious problems for the elderly and about a third of people older than 65 fall at least once every year. Fall-related injuries in the elderly are associated with numerous psychological and physical consequences and are a leading cause of bone breakage and hip fractures, which can lead to complications and permanent disability or death. More than 5 percent of all hospitalizations in people older than 65 years are due to fall-related injuries. Sadly, the research shows that in assisted living facilities where almost all residents are given low-salt diets, the rate of falls and fractures are three times as great as in the normal home environment.

The implications of this research for liability claims incorporating legal damages are considerable. Mild hyponatremia in the elderly can no longer be considered as a simple nonthreatening condition. Evidence clearly points to significantly increased attention deficits, loss of cognitive function, increased falls and fractures – a cascade of conditions resulting in a highly diminished quality of life and a reduced life span. It is a major threat that can be treated by simply adding salt back to the diet.

The evidence contradicting a low-salt regimen for the elderly is impressive and up-to-date. Those responsible for looking after the elderly should very carefully consider any broad, sweeping recommendations to administer a low-salt diet, for both medical and liability reasons. A well-balanced diet, complete with salads, vegetables and fruit is the best approach to ensuring a healthy and active retirement.

Grocery insight: What is fair trade and how does it make a difference?

Important decisions for retirees and near-retirees

Important decisions for retirees and near-retirees