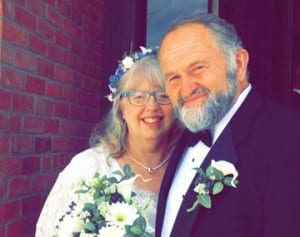 Ellin F. Perry, daughter of the late Marcel & Lenore Blouin of Montpelier, and Raymond E. Bisson II, son of Katherine Bisson and the late Raymond E. Bisson of Barre, were married on July 25, 2015 at St. Monica’s Church in Barre. An old-fashioned barn party followed at the Bisson farm on Bailey Street. Ellin’s ukulele group, The Montpelier Ukulele Players and Cyrus & Kyg Graves performed at the reception.

Bernice Coleman and Timothy Bisson, sister and brother of the groom, were the maid of honor and best man. Janell Perry, daughter of the bride, escorted her mother to the altar. Mary Kay, Cyrus and Kyg Graves, Joanne Marcelle, Nicole Gagne and Jeannie Bisson all participated in the ceremony.

Ellin attended St. Michael’s high school until it closed and graduated from Montpelier High School and Woodbury College. She has been employed at the Montpelier Housing Authority for 16 years. Ray graduated from St. Monica’s High School and St. Michaels College and farmed the Bisson Brothers Farm until 2000 and is currently employed at Harvest Equipment.

Ellin and Ray spent a week in Maine for their honeymoon and will be making their home at the Bisson farmhouse on Bailey Street in Barre.