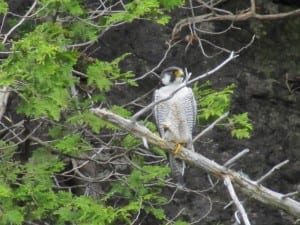 At least 37 pairs of peregrine falcons nested in Vermont this year, with at least 27 pairs successfully producing 50 or more young. VTF&W photo by C.P. Merrill.

Vermont Fish & Wildlife has reopened the cliffs closed to hiking and access earlier this spring to protect nesting peregrine falcons.

“The young peregrines have fledged, and nesting data suggest the species had a good year due, in part, to cooperation from hikers and rock climbers during this critical nesting period,” said Fish and Wildlife’s migratory bird biologist John Buck. “Peregrine nesting success is also helped by the nearly 40 volunteers who monitor the nest sites from March to the end of July.”

“We greatly appreciate the time and effort volunteers put into monitoring the population this year, and we thank landowners and recreationists for their cooperation in protecting nesting peregrines from human disturbance,” said Fowle.

“We appreciate the cooperation of the trail and cliff users,” added Buck. “The success of the peregrine nesting season reflects that this mutual effort was very worthwhile.”

Vermont Fish & Wildlife and Audubon Vermont partner to monitor and protect peregrine nesting sites in Vermont. Peregrine falcons were removed from the state’s Threatened and Endangered Species List in 2005. Ongoing cooperation from recreationists and continued monitoring efforts by Audubon and Fish and Wildlife will help ensure the peregrine’s remarkable recovery in future years.