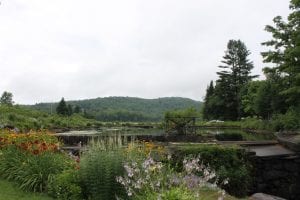 It’s late afternoon and the verdant gardens surrounding the Adamant Music School radiate that classic wet smell often associated with summer camp. But instead of bird songs, the air is punctuated with piano. Multiple pianos, in fact. That’s because students from all over are practicing in the small cabins peppered throughout the campus in preparation for the weekend’s approaching concerts.

The Adamant Music School was founded in the early 1940s by Edwine Behre, an accomplished pianist, passionate activist, and all-around independent woman. Deciding not to marry, she instead focused on her creative work.

Behre lived in New York City’s Greenwich Village with two friends, Alice Mary Kimbal, a writer from Woodbury, Vermont, and her husband, Harry Godfrey, a photographer and writer who had, at one time, trained a young Ernest Hemingway at the Kansas City Star. When she wasn’t protesting in anti-war rallies or advocating for workers’ rights, Behre was teaching piano.

The city was exciting, but Behre had wanted a place where she could bring her students to get out of the city. She wanted an environment that was non-competitive and supportive. To do this, the three friends decided to buy what is now the Adamant Music School’s main building, where the school holds their meals and socializing events.

Today the school serves as a place of practice and instruction for people pursuing music as a life path; it is not for those who dabble or dillydally. Students who come here are serious and have been playing since the age of four and five. They come from all over the world and vary in age. One student who attended a master’s class was as young as ten. Some come from as far away as Australia.

Students have the option to apply for a three-week session where they take classes with a variety of teachers or they can apply to a three-week long class with a master pianist. Past masters have included John O’Conor, from Ireland – his class ran in early July- and Christopher Elton, from London – his class ran in mid-July. Menahem Pressler, originally from Germany, will run his class August 18th to August 22nd.

Currently, the school has two hundred acres of land which house faculty participant buildings as well as twenty-eight piano studios. The grounds are lush; flowers seem to shout their colors. The natural world has a sort of magical beauty. But it’s not the only beauty to be found here.

“Concerts are an incredible gift to the community,” explains local painter, Phyllis Chase, whose paintings are currently exhibited in Waterside Hall. “But the idea that the music school features a local artist every year and hangs the paintings so that concert goers can have both, the music and the visual art, is such a gift.”

Chase, whose work is hung in fine art galleries in Vermont as well as in California, is a plein air painter, meaning she paints on location, never from photographs. This involves traveling, really looking at things, and figuring out the best time of day to paint. Although she started her career as a painter in the 1990s,  she has thought about color her entire life.

“Every single molecule of mine sings from the moment I lift my easel and set out,” she says, her eyes misting.

One of the things that Chase loves about painting is that it allows her the time to just carefully observe things. But with concentration, comes surprises

Once, she set up to paint at Shelburne Farms. In the foreground were rolled bales of hay. In the background, however, were complicated buildings which she decided to paint first. As she painted, the sun continued to sink lower and lower. Suddenly, she found herself racing the light and decided to move on and paint the bales. But a tractor had come and picked them all up. And she hadn’t even noticed; she was so focused.

“For me,” she explains, “it’s really about the excitement and vibrancy of being on location.”

Another time, when Chase was out in the wintertime painting along the banks of the Mad River in Moretown, she kept hearing loud “BOOMS.”

“I’m thinking as I’m trying to paint, what is that? Must be fighters from the airport space in Plattsburgh. And I forgot about it.”

“All of a sudden, there goes my paint bag! The river is racing. I didn’t know what to do first: I want the bag, but I take the easel and the wet painting and throw it behind me.”

Chase then plunged into the water to grab her bag. Only then did she realize what that sound was: the ice breaking farther up river.

“I think what I am really trying to share is a sense of space so that we can reconnect with ourselves. With our experiences. With others.”

In a similar fashion, the Adamant Music School offers the space needed for the arts to remain a subject worthy of intense focus. And within that space (both literally and figuratively), students, musicians, artists, and community members do find connection.

For example, as students try out for a spot in the upcoming concert in the Hall where Chase’s paintings are on display, one student sits down at the large piano and begins a contemporary piece. But for some reason, it sounds familiar. A connection is established. Heavy drops of rainwater fall from the trees outside. His performance fluctuates from sharp and springy to deep and wide. Occasionally he reaches over the keys of the piano to pull on something just out of view. And then the familiarity makes sense: it feels like thunder.

This summer marks the Adamant Music School’s 76th year, and art, both musically and visually, is very much alive. Over the current three-week session, there will be nine concerts open to the public in the one-hundred-seat concert hall where Chase is exhibiting her oil paintings (by appointment and/or prior to concert performances). To see a schedule of concerts and to learn more, visit www.adamant.org or call (802) 229-9297.

Superstars, Long-term Contracts, and the Uniqueness of Baseball

Superstars, Long-term Contracts, and the Uniqueness of Baseball