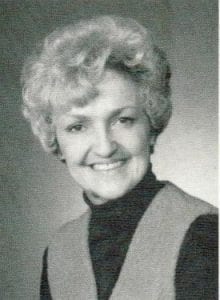 Constance Bernardini Hudson, 89, passed away peacefully on Sunday, March 24, 2019 at Heaton Woods in Montpelier, Vermont where she was a resident.

Connie was born on March 19, 1930 in Montpelier. She was the daughter of Leon and Anna (Felix) Bernardini. Connie graduated from Montpelier High School in 1948. She met the love of her life Norman W. Hudson at the Imperial Diner in Montpelier. They were married in 1957 and made their first home in Lunenburgh, VT. Norm and Connie moved back to Montpelier in 1964 and raised three children on North Street. Connie’s working career included the Montpelier National Bank, the Capital City Gas Company and Dennis, Ricker and Brown Insurance.

Connie had a deep love for her family; she loved camping, skiing, biking and canoeing with her children. She and her children spent many summers boating and swimming in Lake Groton at her sister’s camp. Connie was always busy. She was a Cub Scout den mother and volunteered her time with Argus Santa every Christmas. Connie was a fashionista, always dressed to the nines with never a hair out of place. Much to her children’s chagrin, cleaning was also one of her talents and there was a place for everything and everything was neatly in its place. Her grace and kindness will be missed by those whose lives she touched.

After her children were grown she was a dedicated Grandmother and spent many happy hours with her grandchildren. Connie was a talented crafter and embarked on an adventure with her sister, Sally Foti, creating beautiful angels, which they sold at craft shows around Vermont.

The family would like to thank the staff and residents of Heaton Woods for the endless love and care they provided. Connie was always happy there and developed many close relationships.

Calling hours will be at Guare and Sons Funeral Home from 6 to 8 pm on Friday, April 26th. Burial will be at Green Mount Cemetery.

Memorial contributions may be made to the Heaton Woods Activity Fund, 10 Heaton St., Montpelier, VT 05602.

Those wishing to express online condolences may do so at www.guareandsons.com.