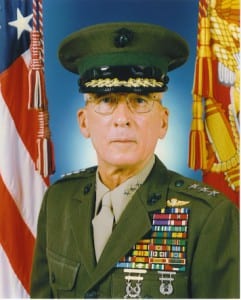 Van Riper retired from the U.S. Marine Corps in October 1997 after more than 41 years of commissioned and enlisted service. In addition to numerous posts around the world and five overseas tours, he commanded a Marine Barracks, 2nd Battalion, 7th Marines, 4th Marine Regiment, and 2nd Marine Division; was director of Marine Corps Command and Staff College; served as the first president of Marine Corps University; was assistant chief of staff for Command and Control and Director of Intelligence at Headquarters Marine Corps; and in his last tour was commanding general, Marine Corps Combat Development Command.

Van Riper also served as an instructor at The Basic School and the U.S. Army John F. Kennedy Institute for Military Assistance, an advisor to the Vietnamese Marine Corps, a military observer with the United Nations Truce Supervision Organization (Palestine), and a battalion, regimental, and division operations officer.

Since retiring, the highly decorated Van Riper has remained active within the national security community as a mentor and as a member of several advisory boards and panels including as a member of the congressionally mandated Independent Panel to assess the Department of Defense’s Quadrennial Defense Review (QDR) Report.

“In an age where we heavily leverage technology to provide us with perfect situational awareness before acting, LtGen Van Riper will offer his insights as to why that construct may fail us in rapidly evolving and complex situations and how those that adapt decision-making processes find success,” said Colonel Lawrence Oliver, U.S. Marine Corps commanding officer, dean of the College of National Services.

This lecture is hosted by the College of National Services and is free and open to the public.

The Todd Lecture Series is named in honor of Army Maj. Gen. Russell Todd (USA Ret.) and his wife, Carol, in gratitude for their dedicated service to the university. Todd ’50, serves as Norwich President Emeritus. With this series, Norwich brings significant lecturers to campus. All events are free and open to the public.