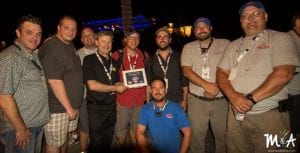 competed from July 16-21st, with Northstar Fireworks lighting up the sky on Thursday, July 18, 2019 with a pyrotechnic spectacle that ignited the night with an unparalleled barrage of color, light, and sound.

The theme for the show was “The Fire Within”, a Celebration of the inner force that burns in each of us. With this show, Northstar Fireworks encouraged spectators to see their emotions come to life and rise in the sky just like the bright pyrotechnic sparks that engulfed the sky. This fireworks display brought out the precious flame that powers the lives in us, to guide everyone to the stars. “The Fire Within” was a powerful and above all, an inspiring show meant to touch the audience’s soul and mind.

Tom Swenson and Evan Wells of Northstar Fireworks were the Choreographers of the show and were pleased to bring home a 2nd place finish in their first International Fireworks Competition. Additional Crew members were Jon Winter, Jon Deerfield, Chris Swenson, and Randy Hunt.

Northstar Fireworks is very pleased to have represented the U.S. at this international competition and be presented with a 2nd place finish. It was certainly a moment in time for Northstar, and Northstar looks forward to a bright future in upcoming shows. Northstar Fireworks is a family-owned company started in 1985, with offices in East Montpelier and St. Johnsbury, VT.

“We are very excited and honored by the outcome of this competition,” Richard Swenson from Northstar Fireworks said. “We appreciate the support we have received from around New England.” Learn more about Northstar Fireworks at www.northstarfireworks.com.

Letter to the Editor