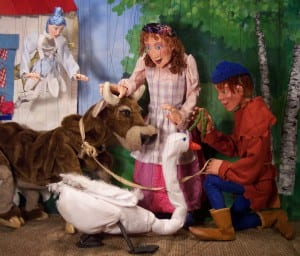 On Sunday, April 6 at 1pm, No Strings Marionettes brings the well-loved British tale of Jack and the Beanstalk to The Barre Opera House, retold with all the magic and mischief their marionettes can muster! The performance is underwritten by Community National Bank as part of its BOH Student Matinee Series.

The action brings Jack from his humble cottage to the magnificent castle high above in the clouds. A sense of adventure and optimism and three magic beans catapult Jack high into the sky where his destiny awaits. With a nod to an ancient telling of the tale we discover if Jack, by taking gold and geese from the giant’s castle, is a thief or if he is simply reclaiming his family’s heritage. You’ll thrill to the unexpected twists in this exciting production, which is tremendously suitable for people of all ages.

The afternoon begins with an interactive sing along where kids get to be part of the show and following Jack’s adventure, No Strings’ Dan Baginski and Barbara Paulson host an intimate question and answer session where everyone gets a closer look at the puppeteers trade.

Engage your senses inside the enchanting world of marionettes. No Strings has toured America for over sixteen years. Their traveling stage transforms any space into an intimate theater, where the seamless blend of movement, music and masterful manipulation captivates young and old alike. With puppeteers in full view, the audience sees how the puppets are brought to life. These Vermont artisans lovingly handcraft the marionettes, props and scenery, whether for an original tale or an adaptation of a classic. Once the mind believes there are no strings… this realm becomes real… and the adventure begins!

Tickets for Jack and the Beanstalk are $6. Order online at www.barreoperahouse.org or call the Barre Opera House at 802-476-8188. The Opera House is handicapped accessible and equipped for the hearing impaired.

Exciting ways to stay motivated and get fit this year

Exciting ways to stay motivated and get fit this year