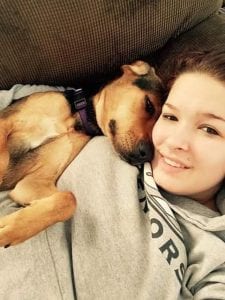 Cristina Burt, mother of Brittany Burt, wants her daughter to be remembered not for her tragic death, but for her compassionate life. To do this, Cristina has set up the Brittany Burt Memorial Scholarship at Spaulding High School in Barre, Vermont. She hopes that this scholarship, in honor of her daughter and her daughter’s love for animals, will help local students continue with their education and career advancement.

The Scholarship will go to a graduating senior planning to pursue a career working with animals. Cristina says that she wants the ways in which the scholarship can be applied to be broad. That way, it can best serve truly deserving students. For example, a student may use it to buy textbooks, a marine biology class, an agricultural tech class, or even scrubs for someone planning to become a vet tech.

Brittany Burt had always been an animal lover. She would often take animals in off the street, even the ones who had a collar and clearly a home. Cristina distinctly remembers her coming home, cheerful and smiling, saying “mom look what I got!” And Cristina would tell her no, that the little critter, be it a cat, a dog, a rabbit, or a hamster, already had a home.

Cristina explained that Brittany “didn’t know what she wanted. She was trying to figure things out,” but Cristina also believes that, had Brittany lived, she would have gone into veterinary medicine. Which is why she hopes the Brittany Burt Memorial Scholarship will receive enough donations to help other students realize and pursue their dreams.

Last year, Cristina raised $2,000 in her daughter’s honor for the Chittenden County Humane Society by throwing a benefit in the Canadian Club. She had a DJ and businesses donated to the silent auction. She even had a quilt made along with t-shirts, bumper stickers, and bracelets. It was great success, but Cristina wondered if this kind of benefit was sustainable. She spoke with JD Green, originally from Froggy 100.9, and he suggested she look into starting a scholarship. So, she called Spaulding High School and so began the Brittany Burt Memorial Scholarship.

To qualify for the scholarship, students will have to be involved in community service, show academic improvement over the course of their high school career, demonstrate economic need, and plan to work with animals.

Cristina is trying to keep Britt’s name alive through compassion and community support. Cristina hopes that by having the support of this memorial scholarship and their community, graduating high school seniors will be able to advance both professional and academically. Cristina explains that it was the cost of college that held her back, and that she hopes this will help open doors for young people in the area.

Interested in donating to the Brittany Burt Memorial Scholarship? You may call Cristina Burt at (802) 793-0225 with questions and ideas. Donations can be mailed to Cristina, at 16 Averill St. Apt 7, Barre, VT or directly to Spaulding High School Scholarship Trust, PO Box 458, Barre, VT 05641. Once the school receives the donation, they will send a letter of thanks along with their tax-exempt number.

As Mahatma Gandhi has said, “the greatness of a nation can be judged by the way its animals are treated.”