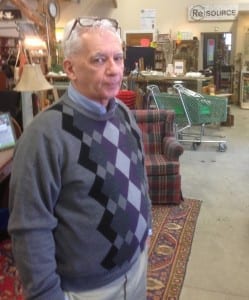 Bob Kershaw has always been the kind of guy who stands up for the underdog and looks to give back to his community, which is just what the ReSOURCE Nonprofit store in Barre needed.

“A perfect fit,” said Kershaw, who had volunteered at the Barre location for six months­—after being one of those customers who visits daily—before accepting the position of Manager.

It has been quite the journey for Kershaw, who has been an advocate for special needs children and adults from his teenage years in Rhode Island, traveling to Brazil as a volunteer with the 4-H international exchange to recently working for the past 19 years in the Vermont school system as a Paraeducator, leaving quite a trail of accomplishments behind him. In Rhode Island as a teenager, he worked on creating a camp for kids with disabilities for a year until it opened where 30 teens and 60 kids with disabilities spent a week at Camp Happiness with the philosophy to just have a good time. The teens all raised their own money and set up the programs, and celebrated their 45th anniversary several years ago.

In Brazil, working with the 4-H and Dept. of Agriculture, he noticed there were few programs for young kids, so he founded a program which still stands called Clube Agricolar Mirim, which means Mini Agricultural Club. He hen started a project to organize all the Shoe Shine Boys and Girls, so they would be fed and and buy their own shoes and equipment.

When he got back home to Rhode Island, he found that jobs in his area were limited and he eventually ended up in New York City, scavenging for jobs in the retail and entertainment field that had to do with the Arts. Stage craft and window and store interiors were his passion, leading to jobs with Macy’s, Bloomingdales, Victory Shirt Co., and a host of others who catered to Tommy Hilfiger, Ralph Lauren and others where he would set up Vignettes for the retailers. When B Altman’s went out of business, Kershaw went to the auction where he met the person who bought the Animated Christmas windows and wanted to bring them to Poland. He helped dismantle them and a year later was asked to go to Warsaw, Poland where he witnessed the aftermath of Communism.

While setting up the windows he noticed the kids and the elderly were so thrilled to see what he was doing. But the middle aged people stood there, arms folded, questioning why this was happening as if they mistrusted him.

“Fifty years of Communism will take a while to wear off,” Kershaw said.

It had been 50 years since Christmas had been openly celebrated and to experience that alone was special.

Kershaw had been caring for a friend with HIV for some time before he went to Poland and upon his return continued his caregiver duties until his friend passed away. This had a profound effect on Kershaw and he started looking for ways to spread information about this horrible disease.

During this time, he had been a photographer in NYC and worked many events for the stars. He was invited to an event where Johnathan Demi, who directed the film “Philadelphia”, was helping present a film by a man who had died of AIDS while filming himself during the struggle. While standing in the coat line Kershaw bumped into an Episcopal Priest, Fr. Ulrich, who was founder of “The Sharing Community” in Yonkers, NY. There, Kershaw helped develop a Peer education program for homeless youth who were on drugs and HIV Positive. The goal was to teach them as much as possible about the illness, substance abuse and homelessness and then go to the schools and speak. Kershaw said it was one of the most amazing jobs he has ever had. Unfortunately all of the members had died toward the end of the program and left him with an amazing awareness of death, dying and caregiving.

Needing a change, Fr. Ulrich had a house in Vermont where his father had just died and wanted to use it as his retirement home. So he asked Kershaw if he could move up there and renovate it so he would be able to retire there, which he did in 2006. Unfortunately Fr. Ulrich had diabetes and within a year needed round-the-clock care. So working two jobs, one as a caregiver to a boy with Cerebral Palsy and the other in school, he spent the next 6 years caring for Fr. Ulrich untll he died in 2012.

Since his friend’s death, Kershaw has moved to Barre where he bought a 16-room Victorian home and is renovating it as a future respite house for Traumatic Brain Injury and is on the board for the Greater Barre Community Justice Center. For the past 20 years, Kershaw has been trying to set up community forums to start a conversation on the opiate problem and in that time has lost at least six students from that problem.

“Finally now the community has taken this problem seriously enough for the State to step in,” Kershaw said. “We now have a strong presence in many communities and it is growing.”

When Noah Fishman, ReSOURCE Store Operations Manager, asked Kershaw about taking on the position of Manager of the Barre Store, he knew this would be the perfect opportunity to apply many of his retail skills and environmental passions and community pay back desires.

“The ReSOURCE Nonprofit Organization has so many great programs like Youth Build which helps young people reach their goals to graduate while learning so many new skills for the future,” Kershaw said.

Less waste, more opportunity seems to be a phrase that captured his interest also.

“When people bring the things that they do not need any more to our donation bay it is the beginning of an amazing journey that will end up in changing our community for the better,” Kershaw said. “I could go on, he said but it would take a few pages.”

He suggested that you all take a walk down and see them. One other amazing thing that happens at the ReSOURCE store is the transformation from a retail space to an entertainment venue where the Flying Stage is lowered and then the shows go on. This past weekend there was an amazing Dance party with the Big Bang Bhanagra Brass Band.

“There are new things every day at the Barre ReSOURCE store,” said Kershaw with visionary determination. “I thank God for this job and the other community work. Hopefully I will live to be 120 to get all I want to do done.”