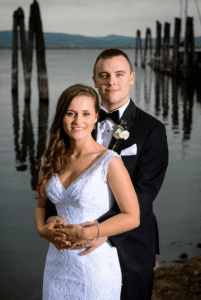 Caleb Nelson, son of Kevin and Deborah Nelson of Duxbury, VT and Alyssa Kezer, daughter of Jennifer Degreenia of Seymour, CT were married on October 1, 2016.

The bride’s uncle, Richard Degreenia of Walden, VT gave the bride away. The groom’s grand mother, Patty Nelson officiated the ceremony at the bow of the ship The Spirit of Ethan Allen on Lake Champlain in Burlington, VT.