Many thanks to the 97 citizens of Moretown who responded to the annual Town Meeting survey. It was the largest participation ever. The citizens were concerned about the use of opiates, statewide broadband, increasing the minimum wage, and prohibiting cell phones while driving. Following are some comments and results from Moretown.

“Vermont should worry more about bringing businesses in and making it easier for people to start and expand their businesses.”

“We are greatly opposed to the legalization of marijuana other than for medical use. We are not “old-fashioned” and we are educated on the effects of marijuana on brain development of children and young people. This is the population that will then think it is o.k., and have access to it.”

“Regarding the legalization of marijuana, we should wait to see the results from Colorado before risking Vermonters’ health and well-being.”

“Marijuana culture introduces young users into a drug culture, and affiliates them with people who have access to other drugs.” 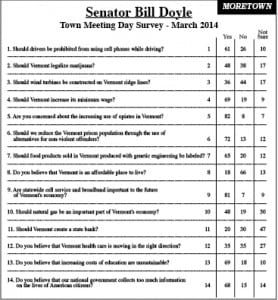