Many thanks to the 634 citizens of Montpelier who participated in the annual Town Meeting Survey. Montpelier supported reduction of prison population, expressed concern about increased use of opiates, and supported increasing the minimum wage. Montpelier’s return was the highest in Washington County. Following are some of the comments.

“When is Vermont going to do something to protect its citizens from those who apparently think that having a suspended or revoked driver’s license is no reason to stop driving?”

“I believe that broader based revenue sources need to be investigated for public school funding and that an overhaul of the property tax and school funding mechanism needs to be pursued. Funding sources should include: “sin taxes” expanded, lottery, cigarettes, luxury, etc., alcohol, income tax (statewide by income).”

“Nonviolent offenders should be made to contribute to society via a restitution system which goes toward education.”

“I was a commuter from Burlington to Montpelier. Many near misses with people talking and texting.”

“The drug addiction culture is exploding and jacking up the crime rate with thefts to gain money for drugs… and making pot legal would help resolve these issues?”

“Every time a small-time drug user/dealer gets probation or gets out for the 6th or 7th time, he or she infects hundreds more of our citizens, and the cycle continues. Turning a blind eye to small-time hard drug use will only increase crimes such as theft, domestic violence, assaults, driving incidents, home invasions, and the basic way of Vermont life.”

“Legalizing marijuana would begin a slide down a slippery slope toward widening further substance abuse. It would make it more difficult to teach our children and set examples for our grandchildren.”

“Natural gas and wind power are better alternatives to meeting our needs than nuclear power or burning biomass or coal.”

“Need more education for young expecting mothers on the commitment of having children.”

“Many of the jobs in the future will be replaced with the upcoming robotic revolution. Self-driving cars, drones, etc.” 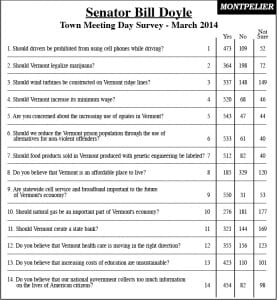 Thanks to Mrs. Massie and All School Bus Drivers

Why I Love House of Cards

Why I Love House of Cards