On May 12th, Chloe Wright, of Montpelier, Jonathan Myles, of Williamstown, Brian Wallace, of Burlington, and Thea Wright volunteered for the National Multiple Sclerosis Society’s Montpelier Walk. Chloe and Jonathan are both members of the Civil Air Patrol Capital Composite Squadron out of Knapp Airport and both have been giving back to their communities for years.

This year, the National Multiple Sclerosis Society’s Montpelier Walk, which is to raise awareness and funds for multiple sclerosis, a disease that affects the central nervous system, included 74 people in attendance, 23 more than the previous year. According to Wes Snyder, the Development Manager of the National Multiple Sclerosis Society, “I can tell you that we are on target to eclipse our goal of $15,000.”

Multiple sclerosis is a disease in which the covers of nerve cells in the central nervous system, the myelin, are damaged, interfering with how the brain communicates with the body. This results in many different symptoms, from changes in eyesight, muscle weakness, and tingling sensations, to difficulty with coordination and balance. Although there are two main forms of MS, progressive and relapsing, it is a disease that varies in severity and symptoms depending on the individual.

According to Snyder, The goal for the Montpelier walk is to continue to expand, both in awareness and in revenue. This would allow the National Multiple Sclerosis Society to continue funding research towards a cure, which, for those living with multiple sclerosis, there is none.

“We saw such wonderful growth in this walk this year… It’s a really fun annual event that brings together the MS community and reminds those living with MS that they are not alone, and their support extends further than their friends and family,” Snyder continued. “They also provide our organization wonderful visibility within our communities.”

Which is exactly what happened on Saturday, May 12th. The walk, which started at the Montpelier High School on a beautiful sunny morning, meandered through downtown and extended around the elementary school, where Myles, Chloe, Thea, Brian awaited walkers with water and snacks.

The group, which had started waving at everyone who passed, also made walkers smile as they grabbed water. The enthusiasm was contagious: Joggers slowed to say hello, cars stopped to chat with volunteers and ask them about what they were doing. Walkers thanked them for their time and efforts.

“Raising awareness for MS is important for me because it is affecting more and more people each year and we have yet to find the cause and a cure,” said Marichel Vaught, the team captain of the walking group, The Bridge Beat.

Vaught is a member of the Government Relations Advisory Committee and the District Activist Leader for Vermont. As a GRAC member, she reaches out to legislators on issues that concern Vermonters with MS. “This past session, we worked on S. 294, which is an act relating to income tax deductions for home modifications. Unfortunately, we weren’t able to move the bill forward.” However, she is still determined to make a difference.

“Our team raised about $1700 through online and offline donations,” Vaught explains. “This is the most we have ever raised. I personally raised $1115.00. I was touched by the immediate response of contributions—many were made by family and close friends, and others were made by people I barely know.”

While the season for their walks has now ended, the National Multiple Sclerosis Society does have a bike ride coming up in August and a Dinner Gala in September. For more info or to get involved, contact Wes Snyder at wesley.snyder@nmss.org or (802) 871-5691. 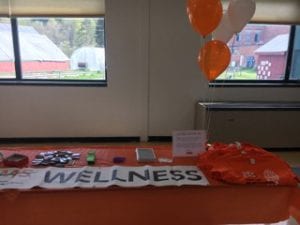