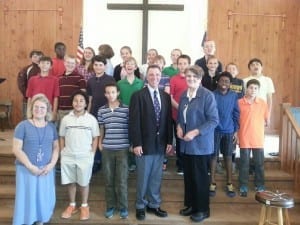 On May 27th, the 5th and 6th grade class at Websterville Baptist Christian School culminated a seven-month study of state government with a visit by Lieutenant Governor Phil Scott.

The students have been learning about civics – up close and personal – under the guidance of former representative Pat McDonald and their teacher, Karen Pope.

Lt. Governor Scott spoke to the students about his many jobs and interests, and the importance of team-building and consensus. He also talked to the students about the many hats he wears, not only as Lt. Governor, but as a business owner and race car driver. He explained to the students that “Vermont is such a unique place to learn about civics and public policy. Since we have a citizen legislature that brings the real world and the experiences of real Vermonters into the State House during the session we aren’t just lawmakers, we’re working Vermonters, too.”