“You can’t do it well if you don’t care,” Nicole Pierce, co-owner of Choice Support Services, explains as she sits on the sofa downstairs at the newly acquired community care home, Averill Place. She and co-owner, Linda Ormsbee, have been working with folks with traumatic brain injuries (TBIs) for almost a decade. Now, with the purchase of what used to be Gingras Community Care Home in July, they will continue their mission of supporting lives with dignity and respect.

Nicole Pierce and Linda Ormsbee had met and become friends while working for a previous employer. They realized that they had a similar work ethic and shared a philosophy on how people should be treated.  “We were working a lot of hours and figured if we were going to be working 7 days a week, 14 hours a day, we might as well see if we could work for ourselves,” Peirce laughs.

They decided to give it a shot. In 2010, they opened Choice Support Services, which specializes in traumatic brain injuries (TBIs). They were (and still currently do) serving people throughout the state. This meant driving all over the place, sometimes as far away as Alburgh and Arlington. “Our vehicle was our office,” Piece says, and both nod.

When Choice opened, it opened slowly. And then, just like that, things took off. Both Ormsbee and Pierce became very busy very quickly. It was obvious that there was a real need. After someone experiences a traumatic brain injury, in most cases, that person must relearn many life skills. “Imagine being hit by a car,” Pierce explains. “Then imagine having to relearn how to do the basic every day life skills, like brushing your teeth, using the bathroom, showering and walking…” It takes more than reminders to get back on track. Often it involves continuous support and cheerleading. Through their work at Choice, both Ormsbee and Pierce hope that folks with TBIs can ultimately get back to living an independent life.

Choice is funded through the Vermont’s TBI waiver program, meaning they get their referrals from the state. Unfortunately, they also receive a lot of phone calls about folks with TBIs who do not qualify for the waiver. Despite that, Pierce and Ormsbee always try to provide some kind of assistanc 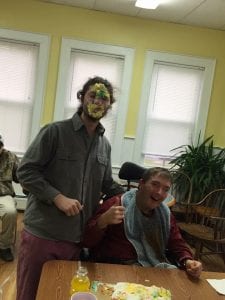 On average, it takes two to three years for folks living with a TBI to graduate from Choice. And even then, it is not uncommon for people to circle back in at different times, depending on how their lives are going. And for some people, it may take up to ten years or more, while others simply never get back to living independently. Whether someone with a TBI will reach independence or not, Choice Support Services offers a program called Choices for Care. Started in 2013, this program helps place folks in adult family care homes in the community. This allows people to live in a home with people who they have developed a relationships with.

“Aging in place is huge in the state,” says Pierce. “That’s been very successful. We’ve provided some end of life care, so people don’t have to die in the hospital. A few home providers will do that.”

Both Ormsbee and Pierce have found some difference when it comes to Choice Support Services on Jones Brothers Way and  their newly acquired care home, Averill Place. One of the biggest difference is that the folks they work with at Choice reside in private homes, which allows them to have one-on-one care. Averill Place, on the other hand, is a community home. People live there together, meaning the  ratio of staff to resident is around one to fifteen. Yet, even though this may allow for less one-on-one time with staff, Pierce notes that the pace is entirely different. Residents at Averill Place have their routines and aren’t really in a rush. They’re more hunkered down and low-key. Folks with TBIs, however, are quite active and need a combination of structure and movement. This requires a lot of energy from staff and from Ormsbee and Pierce.

Yet despite these differences, both women are getting into the routine and learning the swing of things. “We have a lot of things in the works,” says Pierce, as she looks over at Ormsbee and smiles.

Purchasing the care home was the next logical step. Both women have plans that involve benefiting their local community. One way they want to do that is by tackling more of the systemic roots involved in issues plaguing Vermont. One of those issues is substance abuse. Ormsbee explains that “From our experience, looking around the community, we see so many holes in the system. It’s not working. The rehab itself isn’t long enough. If it’s going to be that short, there must be something better afterwards to assist these individuals.”

A lot of the people Choice works with have TBIs due to drug abuse, overdoses, and tainted heroin. “You can’t treat the TBI without treating the mental health and the substance abuse,” adds Pierce. “Living in the community, learning sobriety, a lot of the time it’s forced… How are they going to feel about living a sober life? These are issues that need to be addressed as a whole.”

Pierce asks that when people in the community meet someone with a TBI, that they practice kindness and hold their judgement.“These men and women are reintegrating into the community, please be patient and kind if you encounter them. Making assumptions about people only does harm.”

“Love wins,” Pierce continues, her eyes bright and a little shiny. She laughs and grabs at her t-shirt, straightening out the letters on the front that say exactly that. “That’s why I wear this shirt. Because it’s so true. If you show kindness to people at their weakest times, they’re capable of pretty much anything.”

Death of A Nation