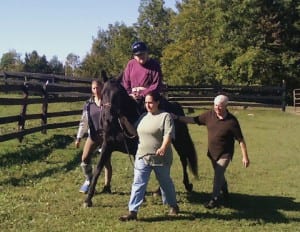 By Aaron Retherford
When Dianne Lashoones moved to Vermont in the late 1980’s and bought Water Tower Farm, a public equestrian facility in Marshfield, it began the journey of her creation of something special in Central Vermont.
Lashoones, who has ridden horses since she was 6, began breeding Tennessee Walking Horses at her farm. But she also had many years of experience as a licensed physical therapist. Those two worlds collided in 2001 when she founded Rhythm of the Rein therapeutic riding program.
It started off as a way to do physical therapy with her clients using horses. It reached the point where she and others thought it would be nice to be able to offer it to more than just kids doing physical therapy, so a group of like-minded individuals created a non-profit 501(C)3 charitable organization in 2007. Rhythm of the Rein serves children and adults with physical and/or emotional disabilities. The youngest rider has been 2 years old, and the oldest was 94. Rhythm of the Rein also works with adults who have suffered traumatic brain injuries.
“I’m a physical therapist, so I had that skill set, and I’ve worked with horses my whole life. Pair the two of them together, and it just comes up with some amazing results for people,” Lashoones said.
Horses are especially valuable when used for physical therapy due to the motion of the horse. When a horse walks, it moves in the same tempo and cadence as humans. For example, someone with cerebral palsy won’t have a normal gait pattern to begin with or someone with an amputation might need to learn how to walk again.
“Because our pelvises are connected to the horses when we’re sitting in the saddle, we can get that input of what a normal motion can be,” Lashoones said. “The pelvis moves in three planes of motion when you’re walking, and the horse does the same exact thing. Horses are just like people in that no horse walks the same as another. So what you do is you take the horse’s motion that gives you what you want for your rider.”
Riding also develops a lot of core strength, and Lashoones said that’s the keystone of physical, occupational, and speech therapies, all of which utilize the horse’s motion.
“It’s a little different than a dog or a cat. Horses aren’t really pets. They’re very social beings. They’re very honest,” Lashoones said. “If someone is having trouble communicating at school because they can’t read body language, the horse is going to pick up on those emotions and give some really good feedback as to how they’re presenting themselves to other people. The horse shows it to them in black and white. Horses are willing and patient. They let people struggle with their problems until they figure things out.”
Currently, there are seven horses in the program. Each horse undergoes a two-month trial so the horse can be exposed to some of the unusual occurrences in that line of work. It can be very stressful, and not all horses pass the trial.
Those that do, now have the opportunity to help military veterans. About four years ago, Lashoones created a program that is specifically geared toward military veterans and their families in order to combat post-traumatic stress and physical disabilities. She entered into a collaboration with three other groups that are also accredited by Professional Association of Therapeutic Horsemanship. Each center runs the same program, so anyone can head down to the VA, fill out the same paperwork, and choose the center that is most convenient.
“The big challenge is to get veterans to even consider this as an option,” Lashoones said.
It requires a lot of outreach and education, which is why Lashoones applied for the $3,000 grant from National Life Group it received last month.
Lashoones has only had one veteran participate in the program fully, but he was so sold on the benefits of riding that he ended up buying his own horse. Granted, most people can’t afford to own their own horse. It’s not like similar programs where veterans are given service dogs to help cope with PTSD. However, working with horses can provide benefits that other animals can’t provide.
“I think what sets us apart is the communication that exists between the rider and the horse. It’s one of those intangible things you kind of have to feel,” Lashoones said. “That’s another difference between a dog and a horse, just the size and the power. Most of these animals are 1,000 to 1,200 pounds, and you’re able to build a partnership with them and work together. You know they’re not responding out of force. You’re not making them do it.”
Rhythm of the Rein operates year-round and serves Central Vermont and the Northeast Kingdom, but Lashoones said she has riders come from as far as Burlington and New Hampshire. There is also a carriage driving program for those who are uncomfortable getting on a horse’s back.
For more information on the programs, check out Rhythm of the Rein’s website at https://rhythmoftherein.org/.