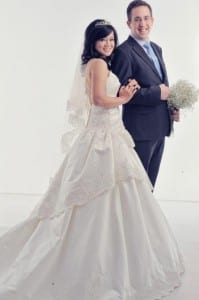 Isaac Hutchins and Yen Liao were married January 13, 2013 at the H Resort in Kenting, Taiwan.

A Vermont celebration was held at the Mill Stone Inn on December 8, 2012. The couple honeymooned in Thailand.

The groom is the son of Robert and Ann Hutchins of Barre, Vermont. He is a 2006 graduate from the Culinary Institute of America in Hyde Park, N.Y. and is currently a sous chef for the Café du Parc at the Willard Intercontinental Hotel in Washington D.C.

The bride is the daughter of Hui-Ching Huang in Pingtung, Taiwan. She is a 2006 graduate from Yale University in New Haven, Connecticut with a master’s degree in Public Health and is currently a project manager for the Kaiser Permanente Health Insurance company in Washington, D.C.