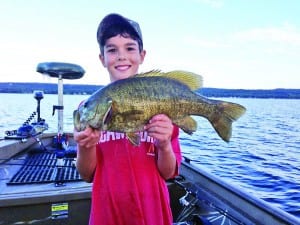 The ranking, which was first reported on WFN’s website, describes Lake Champlain as “perhaps the best lake in all of North America for both quality largemouth and smallmouth bass.”

“This reinforces what Vermonters have known for years, that Lake Champlain has some of the best bass fishing anywhere,” said Vermont Fish & Wildlife Commissioner Louis Porter. “Not only does the big lake have some of the best fishing, it also offers some of the most beautiful scenery anywhere, especially at this time of year.”

Smallmouth bass, which can be found throughout the entirety of the 120-mile lake, have flourished in Champlain’s fertile waters where they have access to optimal habitat and an immense forage base. Champlain’s rocky bottom composition and strong populations of yellow perch and crayfish create ideal conditions for smallmouth bass to prosper.

“The bass population data I’ve collected over the years through electrofishing surveys clearly indicates that bass are abundant, healthy and thriving,” said Good.

“Champlain is a true gem, and it’s important to take note that bass fishing is only one of the many world-class fishing opportunities available in the lake,” said Good. “With more than 90 species of fish present, probably no other lake in the country offers so many different species to target.”

The full WFN report went on to state, “The combined fishery makes Champlain a popular destination for the biggest tournament circuits in the U.S., like B.A.S.S. and FLW. Though anglers can try and go for broke and chase monster largemouths, for the most consistent results, finding smallmouth bass schools along the northern part of the lake is the way to go, especially on the Vermont side. Like with Lake Erie, fall is the best time for smallmouth on Champlain, as bass follow the baitfish into the shallows as the water cools.”

“What makes Lake Champlain unique is that you can catch fish – both smallmouth bass and largemouth bass alike – just about any way you want to,” said VanDam. “It’s an amazing fishery with diverse habitat throughout and large, healthy populations of many species of fish. Whether you’re an avid tournament angler or recreational fisherman, you’ll want to experience Lake Champlain fishing. It’s simply that good.”

To purchase a Vermont fishing license or to find out more about fishing opportunities in Vermont, visit www.vtfishandwildlife.com.

Danziger Live and on Film at the Labor Hall

Danziger Live and on Film at the Labor Hall