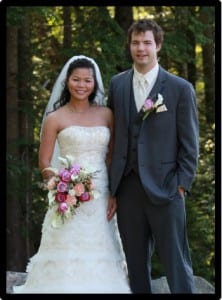 Derek Alan Bibeau and Vui Thi Bui Kwasnik were united in marriage on Saturday August 17, 2013. Pastor Mike DeSena officiated the ceremony at the Kwasnik family residence in Williamstown. Derek is the son of Brian and Lori (Tucker) Bibeau. Vui is the daughter of Arliene Pearson and (the late) Douglas Kwasnik.

A reception followed the ceremony with over 200 family and friends in attendance. The couple resides in South Burlington.