Know how to keep young athletes playing safe and strong

Know how to keep young athletes playing safe and strong 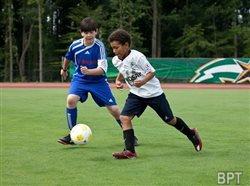 Playing sports is great for kids. It teaches them the importance of teamwork, helps them stay physically active and creates positive habits that last a lifetime. An injury, however, can sideline young athletes for the season – or longer. A recent study by Safe Kids Worldwide identified measures that athletes, coaches and parents can take to prevent serious injuries so kids can stay in the game.

A sports injury sends a young athlete to the emergency room every 25 seconds in the U.S., according to the report “Game Changers.” Made possible with support from Johnson & Johnson, the report takes an in-depth look at data from the U.S. Consumer Product Safety Commission’s National Electronic Injury Surveillance System (NEISS) to explore the types of injuries sidelining young athletes.

“We uncovered some surprising and disturbing data about how often our kids are being injured playing sports,” says Kate Carr, president and CEO of Safe Kids Worldwide. “But we also found some inspiring stories from people and programs that are making a marked difference and helping kids learn how to play smart, strong and safe.”

A few of the most eye-opening findings of the report were:

* The most common types of injuries in 2012 were strains or sprains (33 percent), fractures (18 percent), contusions and abrasions (16 percent), and concussions (12 percent).

* In sports played by both boys and girls, female athletes were more likely to report concussions than boys.

* Get educated and then share your knowledge. Many parents and young athletes dealing with a sports injury say they wish they had known sooner about sports injury prevention resources. Anyone interested in staying at the top of their game can attend a Safe Kids sports clinic or go to www.safekids.org to learn more.

* Teach children how to prevent injury, including staying hydrated, warming up with exercises and stretching, protecting injury-prone areas like pitching arms and knees, and getting plenty of rest between games and throughout the year.

* Make sure kids know not to suffer in silence. Injured athletes may not report how they’re feeling because they’re worried they will let down their team, coach or parents if they ask to sit out a game or in practice. In reality, speaking up about an injury can help ensure the child suffers no serious, long-term effects – and can return to play sooner.

* Half of coaches who responded to a 2012 Safe Kids survey admitted they’d been pressured by a parent or athlete to keep an injured child in the game. Support coaches when they make injury-prevention decisions that protect the wellbeing of the athlete.

“Most states have laws to protect young athletes from injuries or repeat injuries,” Carr says, “but parents and coaches are the front line of protection for our kids. Working together, we can keep our kids active, healthy and safe so they can enjoy the sports they love for a lifetime.”

How to mentally prepare for a crisis in the workplace

Take it to the park: Get active outdoors and help your favorite park win big

Take it to the park: Get active outdoors and help your favorite park win big