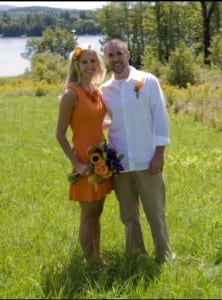 Sara Kasper and Jeremiah Rutledge were united in marriage in a private ceremony held at Caspian Lake in Greensboro on August 24, 2013. The bride is the daughter of Earl and Debbie Kasper of Greensboro. The groom is the son of Betsy Rutledge and the late Jerry Rutledge of North Fayston.