In 1890, naturalist John Muir wrote in his journal “The clearest way into the Universe is through a forest wilderness.” For Onion River Outdoors, a gear and bike shop growing out of a community that had once thrived within and around Onion River Sports, this is literally true.

In December 2017, the iconic Onion River Sports, which had been in operation in downtown Montpelier for forty-three years, closed its doors. Now, that same space bustles with a contagious enthusiasm: It has begin to evolve into the new Onion River Outdoors. “When Onion River Sports closed, there was a lot of unhappiness from the community,” explains Jen Roberts, as she adjusts herself on a newly added sofa. “Although it wasn’t exactly a surprise from the inside, it did surprise the community. A lot of people were really bummed. There was a lot of outpouring of sorrow.”

Jen and her husband, Kip had talked about having their own bike shop for a while, but they had always assumed that Onion 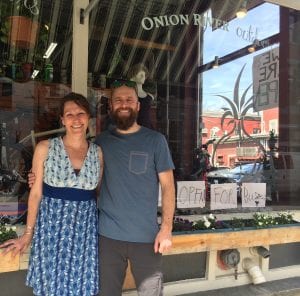 River Sports would be there to satisfy the demand. In order to open to their own place, they would need to go elsewhere. But when ORS closed six months ago, Jen, and Kip, who had worked at ORS for fifteen years, saw an opportunity: They could continue a mission of outdoor community involvement in Montpelier while also establishing their own business.

“That’s the glue for so many people,” continues Roberts, referring to the importance of these events. “We still need to sell bikes, but events are where a lot of people connect with the shop.”

Jen and Kip started working on transforming Onion River Sports into Onion River Outdoors in January, 2018. To make it happen, they’ve been working with Community Nation Bank, Central Vermont Economic Development Corporation, and Community Capital in Barre. They also did a crowdfunding campaign on Indiegogo, an online platform that harnesses the power of community to support and finance projects.

Much of the campaign involved asking people to pre-buy inventory. “We were basically saying, if you give us $200 now, we’ll give you $200 in gift cards. You’re basically helping us fill the store.” And it went well, Onion River Outdoors met their $80,000 goal.

Getting Onion River Outdoors off the ground has taken more than money, though. It has required time and energy and boots on the ground. Which is another way the community showed their support and became involved. Many people showed up on weekends to help clean and paint the store. Onion River Outdoors is not that different from Onion River Sports. It still has the same vibe and the same products.

However, they have added a seating area and they want to focus more on empowering women through physical activity. Another difference is that they want to bring in used gear. They don’t want to do the consignment model, and instead plan to simply buy.

“I think there’s a market for used items,” Jen says as she looks out at the row of bikes lining the walls. “A lot of people would 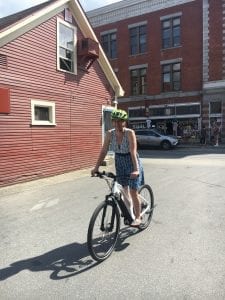 prefer a used purchase to a brand new. For

example, with bikes, there is a certain level of quality that, if you get new, you kind of have to invest a chunk of money. Then you might only get the lowest end of good quality. But if you can put that money into a used bike, you could get a bike with higher performance.”

Prior to taking on Onion River Outdoors with Kip, Jen had worked for Vermont Works for Women and on the Northern Forest
Canoe Trail. A lot of her work has focused on getting people outside, whether through biking, hiking, or paddling. She’s worked with Dirt Divas, a part of Vermont Works for Women that gets middle school girls outside mountain biking. In a way, she describes her previous work experience as a “parallel world” and believes that these skills translate well into her role at Onion River Outdoors. Before she was getting people to try activities that they hadn’t necessarily done before and getting them excited about it. Working at Onion River Outdoors, she says, “is another way of doing that.”

Jen has also written a guide book on Vermont hikes and the second edition has just come out. She grabs it off the shelf and hands it over, smiling.

“It’s fun to sell stuff you feel good about. They’re healthy experiences. It helps people get outside and be more active.”

Onion River Outdoors will be having their Grand Opening on Friday, June 8th. Stop by and say hi!

VOTE FOR VERMONT: Put the Children and the Taxpayers of the State First