Join ‘Skip’ Lamere at Camp with his New Book, ‘Camp Stories From the Backwoods of Vermont’

Join ‘Skip’ Lamere at Camp with his New Book, ‘Camp Stories From the Backwoods of Vermont’ 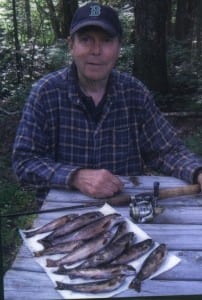 By Aaron Retherford
For over 50 years, Richard “Skip” Lamere has enjoyed backwoods camp life in the Northeast Kingdom.

He’s loved sharing hilarious, gut-busting stories with friends and family over the years. That encouraged him to write a book, Camp Stories From the Backwoods of Vermont, so more people could understand what draws him to camp life.

“I’ve enjoyed camp life so much that I thought other people should enjoy it, too,” Lamere said of his first and only book.

Lamere started his book in 1985 when he belonged to a small writers’ group. He worked on it off and on over the years, so he wouldn’t forget the stories, but decided a few years ago to commit to finishing it.

Lamere completed the book over this past summer and it went to print last month. Now it’s available at local stores like R&L Archery and Next Chapter Bookstore in Barre, Bear Pond Books in Montpelier, Parro’s Gun Shop and Bridgeside Books in Waterbury, among other places.

Lamere is particularly fond of his “Dad’s Pie” story, which may or may not involve a ball of dough that rolled on the floor through mouse droppings. He says his wife could always tell when he was reading it.

All of the stories take place in Vermont, primarily within the Northeast Kingdom. Lamere said his stories, which can span as few as a page or two, are very relatable and should be entertaining for a wide variety of readers.

“Certainly anyone who is a hunter or a fisherman, but I also tried to write it so those who aren’t outdoors people might also enjoy it,” he said.

Outdoorsmen and women understand the importance of good hearty meals that can last throughout a long getaway at camp. As an added bonus, Lamere included many of his family’s recipes from over the years.

“The apple dumplings, the chili, they’re all mainstays,” Lamere said. “We’ve made them for decades, so they’re part of a tradition. Some of them have evolved like my wife’s baked beans. The first batch I ever took to camp probably weren’t as good as the ones she’s made the past 10 years. She’s perfected the recipe, and we want to share them.”

Not Your Ordinary Bagel & Burrito Café

Not Your Ordinary Bagel & Burrito Café