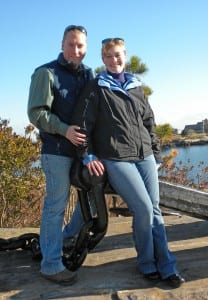 Richard Swenson and Jade Johnson, both of Grantham, N.H,,  are happy to announce their engagement and forthcoming marriage.

Richard is the son of David and Deedee Swenson of East Montpelier. He graduated from Castleton State College and U32 High School, and currently works as the Operations Dispatch Supervisor at Premier Coach in Warner, N.H.

Jade is the daughter of Steven and Jane Johnson of Newbury. She graduated from Michigan State University and Oxbow High School, and currently works as the Translation Project Manager at Hypertherm in Hanover, N.H.

The couple became engaged at the 2013 Central VT Relay for Life in Montpelier, and plan to wed in Newbury on August 9, 2014.