Although the Federalists remained powerful in Vermont, reaction to the Alien and Sedition Acts enabled the Jeffersonians to make gains in Vermont and the nation in the election of 1800. By 1807, the Jeffersonians had captured the governorship for the first time by electing Israel Smith, as well as a majority of the General Assembly, and had substantial representation in the United States House and Senate.

The Jeffersonians’ gains, however, were nullified by Jefferson’s Embargo, halting trade with England. The fact that the state shared a border with British Canada made Vermont more sensitive to the young nation’s foreign policy decisions than many other states. When Jefferson called for an embargo on trade between the United States and Britain (and its colonies), many Vermon-ters were outraged. The young state shipped a considerable amount of its products north to Canada, and received goods from the country. To have the trade cut off was an economic hardship. 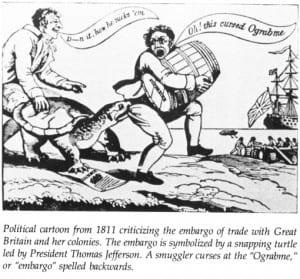 Many defied the ban, skirting marshals patrolling the trade routes. Smug-gler’s Notch received its name in this period because the remote mountain gap was used as a pathway north. It was reported that in 1809 there were as many as 700 sleighs carrying oak and pork on the road from Middlebury to Montreal. Angry citizens transposed the letters of “embargo” to “o grab me” or “go bar em” as a way of denouncing the “dambargo.”

Vermont’s violations of the Embargo Act were so numerous that the United States customs collector in Vermont wrote to the Secretary of the Treasury that the law could not be enforced without military assistance. President Jefferson’s response was to direct the collector to arm and equip vessels to prevent illegal trade.

As a result of the embargo, Jeffersonians paid a heavy political price in the 1808 elections. The Federalists captured three out of the state’s four congres-sional seats, and Isaac Tichenor recaptured the governorship.

Senator Bill Doyle serves on the Senate Education Committee and Senate Eco-nomic Affairs Committee, and is the Senate Assistant Minority Leader. He teaches government history at Johnson State College. He can be reached at 186 Murray Road, Montpelier, VT 05602; e-mail wdoyle@leg.state.vt.us; or call 223-2851.