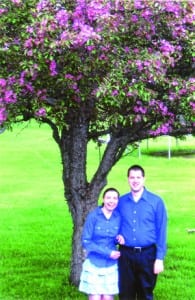 Nancy W. Jarnis and Joseph R. Watson, of Schuyler Falls, N.Y., are pleased to announce their engagement. The future bride is the daughter of Julie Morrison of Peacham and Daniel Jarnis of Woodbury. The future groom is the son of Wayne and Barbara Watson of Malone, N.Y.

The bride-to-be graduated from Hazen Union High School in Hardwick, and attended Community College of Vermont in Montpelier. She is currently employed by North County Cleaners.

The groom-to-be graduated from Franklin Academy in Malone, N.Y., Delhi College in Delhi, N.Y., and the Vermont Dept. of Labor and Industry Electrical Apprenticeship Program. He is currently employed by Core Climate Systems as an electrician/HVAC programmer.