by
in Home Repair
0 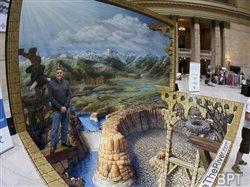 Did you know that the average American uses 2,000 gallons of water a day – twice the global average? Water is hidden in diets, in the energy used and the products purchased. Every pair of jeans worn or hamburger consumed is created using water in some capacity. That’s why water conservation, no matter where you live, is a global necessity.

The Colorado River brings this global issue home. Stretching across seven states, it serves more than 30 million people – or nearly 10 percent of Americans – for their freshwater needs. But it no longer reaches the sea, with the last 90 miles nearly all dried up. In fact, it was named the “Most Endangered River in America,” by conservation group American Rivers.

Many businesses and organizations are setting up water conservation projects and asking for your help for the Colorado River, among other water efforts. Silk(R), the brand known for its best-selling soymilk, almondmilk and coconutmilk, has joined forces with National Geographic Society, Bonneville Environmental Foundation and Participant Media on Change the Course, a group project to conserve fresh water and preserve the ecological health of the heavily-dammed, diverted and overused Colorado River.

To help raise awareness of the Change the Course movement, Silk is challenging people to pledge to reduce water consumption at ReuniteTheRiver.com. Each pledge made will restore 1,000 gallons of water to the Colorado River, working to make the river healthy again.

In addition to efforts by businesses such as Silk, homeowners can also help contribute to water conservation efforts by making simple lifestyle changes such as:

Manufacturers of these appliances have made great strides in developing new technologies that consume less water. For example, there are toilets that use less than two gallons of water per flush.

* Gardening and lawn care – Most landscaping plants only need an inch of water each week. If there is a sprinkler system installed, add a sensor to it that turns the sprinkler on only when rain hasn’t fallen for a set amount of time.

Installing a rain gauge in the yard or edge of the flower bed can help accurately measure how much water has fallen in a week.

Every household can help join the water conservation movement, bringing life back to rivers and waterways across the country and preserving freshwater resources. Take action now. For more information, visit ReuniteTheRiver.com.