It’s Never too Late to Be Brave

It’s Never too Late to Be Brave 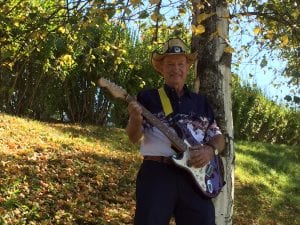 Herb Heath leans back from his desk as he talks. When he becomes excited, he laughs out words or sentences, jumps forward, and moves around. As he tells his story, he includes dialogue which he then analyzes. There is a sense that his narrative of becoming a musician is somehow scripted by luck, opportunity, and the ability to acknowledge and reflect on his circumstances.

Herb has owned Happy Herb’s Plumbing & Heating for forty-five years. And that’s definitely the vibe he puts out: happiness. He explains that “there are times when we need to take what’s bothering you and put it aside. Throw your mind somewhere else.” Once Herb learned that, his life changed.

Because you never know where that “somewhere else” might take you.

While working as a plumber, Herb also bought and renovated buildings. When he was in his late fifties, he bought a house and while doing renovations on one of the tenant’s apartments, he learned that she gave guitar lessons. He had wanted to learn the guitar (he played the snare drum as a school boy in Cabot) and he also liked to sing, although he never dared to do it in front of people. He asked her if she’d teach him guitar by ear, not by reading music, and she agreed.

“It’s all my wife’s fault!” He yells to the room back behind the office with a wide-mouth grin. And it’s true. Tina, his wife, had bought him his first 12 guitar lessons. She also helped pick out his first guitar. He used to practice at the office because he didn’t want to bother Tina with it. He learned a Johnny Cash song and a Merle Haggard song. And it was great. But then, he struggled. The newness was beginning to wear off. He wanted things to happen right away. And they weren’t. So, after twelve weeks, we went in to see his guitar instructor to quit.

“It’s not going to be enough for me. I’m too old” He explained. But before he left, he wanted to sing her a couple songs. And he did. And she told him he was pretty good. That was enough to convince him to keep going.

“Now,” he pauses for dramatic effect, “evolution sets in: it’s almost like it was meant to be.” And he’s right.

One day, maybe a year after starting his lessons, he goes up to Project Independence, an adult daycare service, to talk about installing a hot water heater. He goes all the way upstairs to talk with the director, and notices a ukulele sitting in the corner. Herb asks him if he is interested in playing with him sometime. And so began Herb’s musical journey with others. The two fellas would call each other up, get together for a little bit, and play. Then, one day, Herb decided he wanted to put a concert on downstairs for the residents. He ended up performing at Project Independence for around three years.

Herb recalls that one of his first performance was quite nerve wracking. He and Tina were with the Corvette Club on Lake George putting on a luncheon on the porch of Marine Village motel, when he decided then and there to have a concert all by himself. He took out his guitar in front of around forty people, and began to play. But his hand, which was sweating so badly, was wet, and the pick slipped right into the guitar. He had to stop.

Usually, to get a pick out, you have to shake it until the pick is exactly in the right spot and then flip it and hope it falls out. It’s really hard to do. You might do it twenty-five times and still not get it. But he explains that “God was with me that day.” He flipped it once and it came right out.

“It was the best thing that could have happened.” For some reason, because it happened right in front of his friends, it calmed him down.

Now Herb has a band called Happy Herb & The Good Ole’ Boys. Herb met his current Drummer, George Drew, who was a special education teacher at Spaulding at the time and used to paint Herb’s apartment buildings in the summer. One summer, George comes in and chats with Herb for a little while. And Herb wonders, what kind of work he can give George now that so many of his apartment buildings have moved to vinyl siding. But George hadn’t come in to talk paint, he had come in to talk music: “Music,” he said. “Music?” Herb said. “I want to play in your band.” And he’s been the drummer ever since.

The band is currently Herb Heath, George Drew, and Tom Wales from Montpelier. When Tom joined the group, he had never played lead guitar. But that was what the fellas needed, as Herb played rhythm. Tom said he was not a lead guitarist, but he wanted a shot at it.

“And I must say,” Herb leans back and shakes his head in happiness, “he sure has come a long way. He’s a big addition to the band. It takes years and years to learn how to lead. He was right up to it, but had never had the opportunity, you see.”

They play in a lot of nursing homes and they also play once a year at the Fall Foliage Festival in Walden at the little white church. Herb has relatives on his mother’s side up there. He likes the feeling of coming home, and playing there, but also thinks it would be fun to do a concert in the park sometime.

One thing that has surprised Herb about music is that it is very close to people’s hearts. In the beginning, he had no idea how serious this was. He realized that everybody wants to be heard and that you have to be careful of people’s feelings, because music gets right to their core.

“It takes a lot of courage to take that step. A lot of us don’t live to our potential. Because we aren’t able to take that step. Some people may see performing like a kind of showing off. But it’s not that at all; it’s more than that, it’s a hell of a lot deeper than that. You’re exposing every part of your being to the world with no reservation. And I gotta tell ya, it takes courage to do that.”