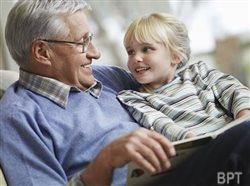 Have you noticed your loved one having trouble seeing what they’re doing at the stove? Are they having trouble recognizing which grandchild is asking for help tying his shoe?

For people over the age of 60, age-related macular degeneration (AMD) is the leading cause of irreversible vision loss and legal blindness, which affects as many as 15 million Americans. The slow loss of vision often isn’t immediately noticed, but AMD is a condition that continually worsens over time, despite being treatable in early stages. Patients with the advanced form of the disease develop a blind spot, permanently blocking straight-ahead vision, which often results in reduced quality of life as the problem worsens.

Veteran and retired teacher Roy Kennedy, 77, of Moreno Valley, Calif. and his wife, Kay, frequently took road trips across the country in their 35-foot RV, visiting national parks and monuments, even as Kennedy’s sight began to deteriorate 20 years ago. Six years ago, he had to give up driving and travel was less pleasant because he couldn’t see straight ahead. Kennedy had End-stage AMD and was told his sight would not improve, which was depressing and limiting. He wondered, “What would I want to see first, if I could regain some of that lost vision?”

Kennedy learned about a remarkable treatment option proven to restore sight and improve quality of life for patients with End-stage AMD, called CentraSight. The CentraSight program utilizes a tiny telescope, about the size of a pea, which magnifies images seen in one’s “straight-ahead” vision. The images are projected onto the healthy portion of the retina not affected by the disease, making it possible for patients to see the central vision object of interest. The FDA-approved device is implanted in one eye and surgery is performed on an out-patient basis. The cost for the telescope implant and related program visits are Medicare eligible in all 50 states. Kennedy underwent surgery because he was eager to see his wife, family and regain independence.

“I worked with a great team of specialists, all part of the CentraSight program,” Kennedy says. “My doctors counseled me about what to expect from the procedure, particularly afterwards. There was a significant amount of rehabilitation required to adjust and become proficient at using my new vision. I also was warned that my sight would not be like it was in my youth. I wouldn’t be able to do everything I used to, nor would I be able to see the minute I opened my eyes.”

Kennedy says the surgery was a big success for him. “The most amazing part is seeing my wife’s face again,” he says. “I’ve regained the ability to do many everyday tasks, like reading, working on my computer and watching old Westerns on TV.  My wife and I are even back to traveling the open road in our RV – which I love (she drives, of course).”

“Patients tell me before the procedure about all the things or people they can’t wait to see again,” says Dr. Marc Levy, of The Sarasota Retina Institute, a Fellow of The American Academy of Ophthalmology, and American College of Surgeons. “Recognizing the smiles on grandchildren’s faces or remembering an event depicted in a photograph are moments they are happiest about afterward.”

Levy cautions, though, that this procedure is not for everyone, “The telescope implant is not a cure for End-stage AMD. As with any surgical intervention, potential risks and complications exist, including possible side effects such as decreased vision or vision impairing corneal swelling.”

There are nearly 100 CentraSight treatment centers nationwide. To be considered a potential candidate, patients must:

1. Have irreversible, End-stage AMD resulting from either dry or wet AMD
2. No longer be a candidate for drug treatment for AMD
3. Have not had cataract surgery in the eye in which the telescope will be implanted
4. Meet age, vision and corneal health requirements

Patients should talk to their ophthalmologist to see if this procedure is right for them.  Or, if you or your loved one has been diagnosed with AMD, visit www.CentraSight.com, or call 877-99-SIGHT (877-997-4448) to find out if you may be a candidate for the procedure.

Nomophobia: When a modern smartphone affliction leads to addiction

Nomophobia: When a modern smartphone affliction leads to addiction