The Barre Lions Club Delivering to the Vermont Foodbank 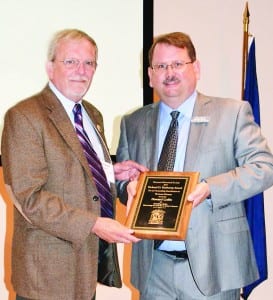 On September 27th, the Vermont Historical Society presented Howard Coffin with the Richard O. Hathaway award for his book “Something Abides: Discovering the Civil War in Today’s Vermont.”

“It was a difficult decision among five other nominees from around the state,” said Mark Hudson, Vermont Historical Society’s executive director. “Howard’s long involvement with historic preservation and his passionate publications about the Civil War exemplify Dick Hathaway’s dedication to the preservation of Vermont history.”

The Hathaway Award is given each year in recognition of an outstanding contribution to the field of Vermont history. It is dedicated to the memory of Richard O. Hathaway, whose lifelong work was teaching Vermont history. With the guidance of “Something Abides,” Civil War sites can be located in the beautiful Vermont landscape of hill farms and small towns that resemble the Civil War era more than any other state.

Howard Coffin is a Montpelier resident and a seventh generation Vermonter with six ancestors who served in Vermont Civil War regiments. A member of the Vermont Sesquicentennial Commission, he was appointed by the U.S. Senate to the Civil War Sites Advisory Commission and served on the boards of the Association for the Preservation of Civil War Sites and the Civil War Trust.

Coffin’s books include “Full Duty: Vermonters in the Civil War,” “Nine Months to Gettysburg,” “The Battered Stars,” “Guns Over the Champlain Valley” and “Something Abides: Discovering the Civil War in Today’s Vermont.” These are available at vermonthistory.org/store or by calling (802) 828-1414.

Returning to the Community