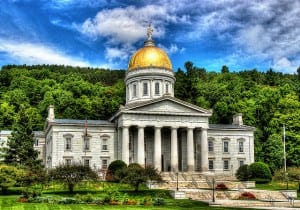 When Vermont was in its infancy, its elected leaders met in various locations throughout the republic, as Vermont had no capital city or town. Vermont entered the Union in 1791 and the legislature continued its nomadic ways, meeting in a different location each year. For thirty-five years Vermont’s government operated without a seat of power or a state house within which to meet. During this period the legislature met forty-seven times including: eight meetings in Bennington, one in Burlington, one in Castleton, one in Charlestown, New Hampshire – then part of Vermont, one in Danville, three in Manchester, two in Middlebury, two in Newbury, one in Norwich, seven in Rutland (where a special building was built for the meetings), one in Vergennes, four in Westminster and fourteen in Windsor which claims the title of “first capital of Vermont.”

In 1805, the legislature selected Montpelier as “the permanent seat of the legislature for holding all their sessions” upon two conditions: first, that Montpelier should give the land for a state house building – build said building by the first of September, 1808 and second, that if a future Legislature should cease to hold its sessions in Montpelier, the State would repay Montpelier the value of the property.

Citizens of Montpelier and nearby towns raised $6,138.88 by the sale of subscriptions ranging in value from $5 to $100. The amount raised exceeded the amount needed to construct the first State House. Land was given by Thomas Davis, the son of Colonel Jacob Davis – Montpelier’s first permanent settler. The first State House was designed by Deacon Sylvanus Baldwin and was constructed under his supervision. It was a simple three story wooden structure with a cupola that housed an “excellent bell.”

By 1831, the state government had grown beyond the capacity of the simple wooden structure in which it was housed. In 1832, the Legislature appropriated the sum of fifteen thousand dollars toward the construction of a new State House with the understanding that the Town of Montpelier would raise an equal amount through the issuance of a bond. A building committee was appointed with Lieutenant Governor Lebbeus Egerton named as superintendent. The committee visited recently completed capitol buildings in Connecticut, Massachusetts and New Hampshire to observe firsthand various architectural features that might be incorporated into the design of Vermont’s new State House. The committee selected the design of Ammi B. Young, a Burlington architect, to design their new State House.

On the evening of January 6, 1857 a horrific fire destroyed the interior of the State House and its dome. Through the heroic efforts of Montpelier citizens, most of the books of the library, the portrait of George Washington, a “goodly” portion of the papers in the office of the Secretary of State and a few pieces of furniture were saved. It was a devastating loss for the State; only the thick granite walls and the Doric portico remained.

A special session of the Legislature was held on February 18, 1857. The Senate met at the Washington County Court House while the House of Representatives held their meeting at a local church. An attempt to remove the capital from Montpelier failed and the Legislature appropriated forty thousand dollars provided that the citizens of Montpelier should raise a sum equal toward the total cost of “rebuilding and improving the State House.” Thomas Silloway of Boston, an architect who had worked with Ammi Young, assessed the ruined State House and drafted plans for reconstruction. Thomas Powers of Woodstock was selected as Superintendent of construction for the project. By August of 1858, it became obvious that State House construction would not be completed that year and the granite walls would not be protected from the harmful effects of the coming winter weather. The citizens of Montpelier, without solicitation, provide an additional ten thousand dollars for the construction of a temporary protective cover to insure that the granite walls would not be harmed.

When the Legislature of 1858 refused to appropriate additional funds required to complete the building, the citizens of Montpelier raised the fifty-three thousand dollars required to fully fund the enterprise through a special subscription. With sufficient funds now in-hand; the commissioners selected J. R. Richards of Boston as the architect to complete the reconstruction. The new State House retained the Grecian portico with the central building and wings completed in the Renaissance-revival style. A Renaissance-inspired wooden dome with a windowed drum was designed which would rise over one hundred and thirty-six feet above the floor of the portico. The dome was to be surmounted by an allegorical statue of “Agriculture” designed and executed by the Vermont sculptor, Larkin Goldsmith Mead. The fourteen foot tall statue was carved in wood, since the wooden dome was incapable of supporting the far greater weight of a stone sculpture.

A comprehensive architectural and historical study of the structure was completed in 1981 which recommended an extensive renovation to restore the State House to its 1859 appearance. Many in the Vermont Legislature failed to appreciate the historical significance of their State House, and were hesitant to invest the nearly four million dollars required to complete the project. A group of concerned citizens organized a private enterprise, The Friends of the State House, to undertake the ambitions effort to restore Vermont’s “House of the People.”

The “Friends” informational and fund-raising campaign raised awareness of the historical, architectural and artistic importance of the State House as well as raising over one million dollars in “seed money” toward the rehabilitation effort. In short order, the Vermont Legislature was persuaded to commit state funds toward the effort and a modest determined mission to restore the State House to her 1859 elegance began. The restoration was completed in 2000. After a nearly twenty year effort, the State House again reflected the respect and pride of the Citizens of Vermont hold for their state and its government.

Today, The Vermont State House stands as a great tribute to the dedication and determination of the people of the State of Vermont and especially the citizens of Montpelier, rebuilding and preserving for future generations Vermont’s own “Temple of Democracy.”

H. Brooke Paige is a member of the Friends of the State House – This article includes information found in Vermont’s State House by Mary Greene Nye (1936) and Temples of Democracy by Henry-Russsell Hitchcock and William Seale (1976). The linoleum-type print of The Vermont State House – 1859 (2008) by Mary Simpson is used with her permission. Copies of the print are available from the State House gift shop.