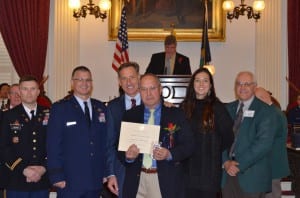 U.S. Army Major Ronald Greenwood, of East Randolph, was recently honored by the governor for his military service.

In a ceremony at the Vermont State House on November 12th, Gov. Peter Shumlin presented Greenwood with the Vermont Veterans Medal, awarded to U.S. veterans from Vermont, as well as the Vermont Distinguished Service Medal, for Vermont veterans who have served in a combat theater.

Major Greenwood graduated from Norwich University and served in the army from 1961 through 1971. He served more than four years in Germany, followed by several years at a post at the University of Alabama, a year in Vietnam, and a year with an Army security agency.

Upon retiring from the Army, Major Greenwood returned to Vermont and to the family business. He still operates L.W. Greenwood & Sons, and resides in East Randolph with his wife, Lillian.