Thanks to the Granite Center Garden Club

A Return to Community 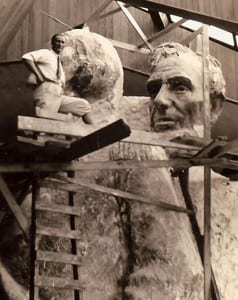 The Barre Opera House presents Lou Del Bianco’s “In the Shadow of The Mountain,” a one-man play where the actor portrays his grandfather, Luigi Del Bianco, Italian immigrant, Barre stonecutter and chief carver on Mount Rushmore, on Friday, November 7 at 7:30 p.m.

In 1909, when cousins in Barre, Vermont wrote that skilled carvers were needed in the Granite City, 17-year-old Luigi boarded the La Touraine out of Naples and headed for America. In 1913 World War I broke out and Luigi returned to Italy, but emigrated back to Barre after the war’s end. After another year’s work as a stonecutter, he moved on to Port Chester, N.Y., where his brother-in-law introduced him to Mount Rushmore designer Gutzon Borglum. “Bianco,” as Borglum affectionately called him, began working at the sculptor’s Stamford studio.

Throughout the 1920’s Luigi assisted Borglum with Stone Mountain in Georgia and the Wars of America Memorial in Newark, N.J. And, in 1933, Borglum hired Bianco as chief stone carver on the Mount Rushmore National Memorial. Luigi’s job was to carve the “refinement of expression” or detail in the faces.

Lou Del Bianco has performed all over the country, from The Kravis Center to Carnegie Hall. He has traveled the Northeast as an artist in residence for 17 years, performed in San Diego at the International Reading Association’s annual convention and has served as a keynote speaker for arts and education conferences from North Carolina to Massachusetts.

Raves The Philadelphia Enquirer, “Del Bianco soars as a storyteller!” Billboard Magazine says he is “one of the most exciting performers to come along in years.”

Tickets for “In the Shadow of the Mountain” are $10 for adults, $7 for ages 18 and under – order online at www.barreoperahouse.org or call the Barre Opera House at 802-476-8188. The Opera House is handicapped accessible and equipped for the hearing impaired.