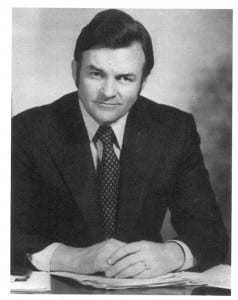 The Democrats were able to recapture the governorship in 1972 under Thomas Salmon, a Rockingham attorney. He was no doubt helped by a blood-letting Republican primary fight between victor Fred Hackett and James Jeffords. Salmon continued the environmental work begun by Davis; one of his main themes was to slow development and keep “Vermont for Vermonters.”

Perhaps Salmon’s greatest accomplishment was his property tax relief program. In his farewell address to the 1977 Vermont General Assembly, Salmon said, “By our decision in 1973 to commit state revenue sharing money and land gains tax money to refund to local taxpayers on income criteria, we have made the most regressive tax in the country, the local property tax, more progressive.”

Salmon was also remembered for his fiscal conservatism during the recession in the mid-seventies in Vermont. In 1980, “The Vermont Business World” wrote, “Thomas Salmon campaigned as a liberal in the 1972 election but economic conditions forced him to preside over a large decline in real estate expenditures. If statistics alone were used to measure political sentiment, he would go down in the books as the most conservative governor in modern Vermont history.”

Salmon was a popular governor, and he could well have received the Democratic nomination for the United States Senate seat vacated by George Aiken in 1974. But Salmon said he had more work to do in Vermont.

Salmon ran again for the governorship in 1974, winning handily over Walter “Peanut” Kennedy, of Chelsea, and waited until 1976 for his shot at the Senate seat held by incumbent Robert Stafford. (Stafford, governor from 1958-1961, had been elected senator upon Winston Prouty’s death in 1971.) Stafford defeated Salmon in a hard-fought campaign, dashing the Democrats’ hopes for winning both Senate seats.