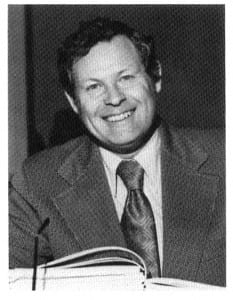 The Republicans recaptured the governorship in 1976 through Richard Snelling. Snelling had campaigned on a platform of providing more jobs to Vermonters and running government more efficiently, which apparently appealed to Vermonters as they returned him to the governorship in 1978, 1980 and 1982. He gained national attention through his advocacy of changes in federal-state relations and as chairman of the National Governors Association. Richard Snelling became the second governor in twenty years to be elected to a third term.

During his long tenure, Snelling strongly supported equality of opportunity for women, and he took the lead in amending Vermont’s Constitution to include the Equal Rights Amendment. Acquisition of low cost Canadian power was another major accomplishment of the Snelling years. At the national level he was the leading proponent of federalism. The high quality of his appointments, aggressive leadership and progressive vision of the future were other characteristics of his administrations.

In his Inaugural Address in 1991 beginning his fifth term, Governor Snelling stressed the need to put Vermont’s fiscal house in order:

My oath has been sworn, and I must begin discharging my obligations now by telling you frankly and clearly that Vermont faces an immediate and urgent need to limit its public spending to a rate which can be supported by reasonable levels of taxation even in years of average economic activity.

Our state General Fund budget is being driven by a very small number of very expensive programs, all of which are escalating in cost remarkably faster than either the United States or the Vermont economy can be expected to support on a dependable and sustainable basis. Just seven programs – Welfare, State Aid to Education (including retirement funds and aid to higher education), Property Tax Relief, Use Tax reimbursements, Corrections, Medicaid and Debt Service are together responsible for about 490 million dollars.

This is nearly 80% of the approximately 630 million dollar estimated spending for 1991. To those who wonder where the money is going, let it be clear that it is not going to hundreds of hidden items. It is not dust in the corners of bureaucracy. It is the mountains in the center of the public policy stage.

Applying to college? Practical advice for finding your dream university