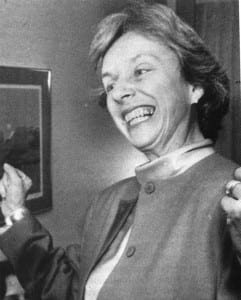 In the 1984 election, the Democrats made substantial gains and reaffirmed that Vermont was a two party state. Madeleine Kunin, elected Vermont’s first woman governor, interpreted her narrow victory over John Easton as an indication that “independence is alive and well in the State of Vermont.” Easton carried over 140 towns while Kunin captured almost every city. For the first time in history, the Democrats gained control over the Vermont Senate. In addition, the Democratic party made gains in the House of Representatives.

During the Kunin years, emphasis was placed upon the environment, children, mental health services and education. In her Farewell Address before the Vermont General Assembly in 1991, Governor Kunin said:

As I look back, it is when we worked together that we were at our best.

That is how we have come so far in these six years, moving to the head of the class in so many important areas; today, Vermont is the #1 state in the country for children’s services, for the environment, and for mental health services. And we are ranked 1 of the top 10 education states in the nation.

Tomorrow’s jobs will go to those states who have developed their brain power, and Vermont will be ready because in good economic times, we invested our wealth in our children, and it is they who will bring us the greatest rewards.

An excellent government is a humane government, one that makes choices based on truth, justice and compassion.

To achieve that, I have learned that passion counts. Passionate conviction makes the difference between what happens and what doesn’t.

That there is only one reason to be a political person – to translate belief into action, to create change for the better – whenever, wherever, and however one can.

Governor Kunin should be credited for giving key appointments in her administration to women and, in general, broadening the base of women in politics.

The Guardian (a fanciful story)

The Guardian (a fanciful story)