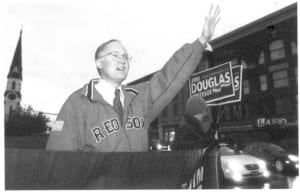 In 2002, Republican Jim Douglas, a former legislator, state treasurer and secretary of state, defeated Lt. Governor Doug Racine in the hard-fought Governor’s race. Douglas was the first Republican to hold the governorship in over a decade. He entered the office “during a period of dramatic economic downturn and declining state revenue.” His goal was to support “economic stimulus, new industries and businesses to Vermont while promising to respect the tradition and legislative history of environmental protection.” Because of the economy, he “cut both the size and budget of state government while responding to a wide array of social welfare problems including rising medical care costs, drug treatment and prevention.”

During his administration he supported a measure of “property tax relief by increasing the sales tax from 5 to 6%, extending it to telephone bills, soft drinks and beer and increasing the property transfer tax to help support education funding.”

The Associated Press of Vermont voted Republican Jim Douglas’s victory in the governor’s race the top news story of the year. A Times Argus editorial had this to say about the upset victory: “James Douglas’s stunning victory in the election means that Vermont will have a governor who traces his political lineage directly back to the last Republican governor, Richard Snelling. The political skills Douglas learned from Snelling back in the 1970s and 80s will be put to the test as he tries to develop a constructive program with bipartisan appeal.”

According to Christopher Graff of the Associated Press, Douglas “worked the hardest, fashioned a simple and compelling message and stuck to it. The Douglas message never wavered. Jim equals jobs. It’s time for a change.”

In his farewell address, Douglas said the following:

“We not only upheld our state’s environmental traditions, we strengthened them in realistic and responsible ways. We pursued “The Vermont Way,” recognizing the codependence of our environment and our economy.

“Today, we are at the forefront of energy efficiency and renewable energy policy. And we took a strong leadership position in addressing climate change through efforts like the Regional Greenhouse Gas Initiative and tough automobile emission standards.

“As I reflect on the last eight years, I am proud of the progress we made in health care, for the safety of our communities, for our natural environment, for our economy and in our fiscal strength. I am proud that we ensured that access to government is not a privilege, but a right for all people. But most of all, I am proud of the improvements we made in the lives and well-being of the people of Vermont. After all, that is why we serve.”

Right Around the Corner

Right Around the Corner