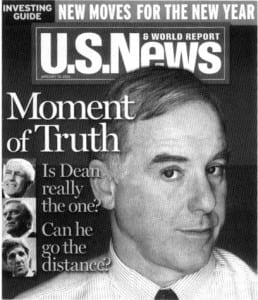 Governor Howard Dean became Governor in August 1991 as the result of the untimely death of Governor Richard Snelling. His time in office was the second longest tenure in Vermont history. According to the Burlington Free Press, the following are the highlights of the Dean years:

• Children’s Health Care: An expanded Dr. Dynasaur program provides access to health care to all children under 18 whose families do not have private insurance.

• Health Access: Expanded Medicaid to non-welfare families with incomes up to 150 percent of the poverty level.

• Conservation: The state Housing and Conservation Board invested $42 million to match federal and private money to protect 308,915 acres of farm, forest and recreation land.

• Success by Six: A constellation of nine new and existing programs focus on giving preschool children a healthy start in life and preparing them for school.

• Fiscal Management: Dean championed balanced budgets and holding down the rate of increase in state spending. He persuaded lawmakers to create a “rainy day fund” to help balance the state budget during recessions.

Governor Dean’s presidential campaign attracted considerable national attention as he came close to winning the Democratic nomination. Of the campaign Dean said, “The biggest thing I’m going to miss terribly is the ability to influence public policy with the most clout of anybody in the state.”

In Dean’s farewell, he said the following: “As the middle class gets more and more pressed by a more and more global society, more and more difficult society economically, what I have tried to do is to build what I call a middle class safety net. So that two wage earners in a family, working hard to make ends meet, may someday hope that their kids will be able to go to college just as we were. This is the first generation where we are facing, where it’s more difficult for parents to pay for college than it was for my parents’ generation, and we can do better.”

Governor Jim Douglas, in his inaugural address, made this acknowledgement of Dean: “He will be remembered as a confident, compassionate and forthright leader who always thought to do right by the people. On behalf of a grateful state, thank you, Howard Dean.”