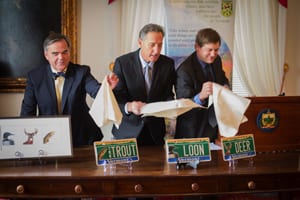 The new designs include a loon, a brook trout and a white-tailed deer plate. The new plates will replace the old catamount and peregrine falcon plates. They can be ordered online at www.tinyurl.com/VtConservationPlate and picked up at the Montpelier DMV.

“These new plates allow Vermonters to show their support for Vermont’s wildlife and wild spaces year round,” said Gov. Shumlin. “I encourage Vermonters to sign up for one the next time they are registering their vehicle.”

“We wanted to do something to get people excited about our conservation plates again,” said Fish & Wildlife Commissioner Louis Porter. “I see these plates on vehicles throughout the state, so I know they are popular with Vermonters. I’m sure that these new plates will be a big hit.”

The image for the brook trout plate was painted by former Fish & Wildlife commissioner Patrick Berry just before he stepped down as commissioner earlier in 2014. The deer and loon images were painted by Berlin (Vermont) artist Linda Mirabile.

“We are delighted to be offering these handsome new plates to Vermonters,” said Robert Ide, Commissioner of DMV. “Although I admire the trout and deer, my personal favorite is the loon.”

Funds from the sale of the plates go to the Nongame Wildlife Fund and the Watershed Grant Fund. The Nongame Wildlife Fund protects animals such as lynx, loons, bats, turtles, and bald eagles. The Watershed Grant Fund gives money to projects such as managing stormwater runoff to protect local streams, creating canoe access on rivers, and developing wetland education programs for children. Funds raised from the sale of plates in excess of the needs of the current programs will go to the Green Mountain Conservation Camps, where kids ages 12 to 16 learn about ecology and the outdoors.

The loon was chosen by the public to replace the peregrine falcon through an online poll conducted by the Fish & Wildlife Department. Brook trout were chosen to represent the Watershed Grant Fund because they require clean water and intact habitat to thrive.

A third option, the white-tailed deer plate, was added to the lineup due to popular demand and also to raise funds for these programs.

Conservation plates have raised over $2 million since they were first released in 1997. Donations can also be made to the Nongame Wildlife Fund online at www.vtfishandwildlife.com.