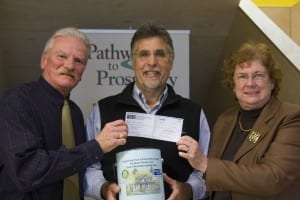 A family’s everyday life is drastically changed when a job loss occurs or when they experience unexpected medical bills. It isn’t long before utility bills and mortgage payments fall behind and this particular family is unable to buy adequate groceries and fuel to stay warm through the winter.

Green Mountain United Way (GMUW) has partnered with the Barry Rotary Club for the past three years in its Give-A-Gallon Project by providing marketing services. Gallon containers can be found in several local businesses into which people can drop their spare change and help the Rotarians in their efforts to relieve some of the fuel assistance problems that plague many of our residents. The proceeds from this project are turned over to the Central VT Community Action Council (CVCAC) to augment the fuel assistance monies that come to them from the Federal and State governments. Unfortunately, these government funds continue to be cut annually and many people are not eligible for as much assistance as it takes to properly heat a home for the entire season.

Hal Cohen, Executive Director of CVCAC, recently related a story about a couple in central Vermont that was going through a very rough period because of the man’s declining health and his wife having to reduce her hours at work in order to take care of him. With a much smaller paycheck coming in, the result was their falling behind with bills and having no propane with which to heat their apartment. The propane supplier would not approve credit for them, nor would they deliver less than 100 gallons. The couple was barely making ends meet and yet they were over income for the Vermont Supplemental Fuel Program, the Crisis Fuel Program and for 3Squares VT for food benefits. Many people, called the working poor, fall into this category.

It is for these folks that the Barre Rotary Club donates to CVCAC the proceeds of its Give-a-Gallon Project. In the past year, nearly $3,500 has been donated to them for the purpose of providing a little more fuel assistance for the working poor in our area. CVCAC works closely with people in these situations and advocates for them with fuel suppliers as much as possible to try and avoid families having to suffer the cold weather during the winter.

As part of its Basic Needs initiative, GMUW is proud to be a part of helping to provide more fuel assistance monies for local families. For more information, call GMUW at 802-229-9532.