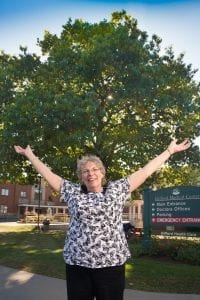 Longtime Gifford Health Care Nurse Effie Farnham, whose career spans 51 years, retired in mid-May. Her friends, family, and colleagues will send her off with best wishes at a retirement party Thursday, June 7, marking the beginning of the next chapter in Effie’s community-minded life.

“From her colleagues to her many patients, the Gifford community will deeply miss Effie Farnham,” said Gifford President and CEO Dan Bennett. “Effie’s exceptional skill as a nurse and her care and compassion have served Gifford and our patients well over the last five decades. We look forward to celebrating her impressive career and wish her all the best in her richly deserved retirement.”

Effie Farnham, née LaCount, was born and raised in Vermont—born at Gifford, in fact—and “grew up knowing I wanted to be a nurse.” After graduating with the Whitcomb High School Class of 1964, she “went from little, bitty Stockbridge and Bethel” to study nursing for three years at Worcester City Hospital in Massachusetts. (The Gifford School of Nursing had closed in 1959.) “I managed to stick it out,” said Effie, who met her first husband, a dairy farmer, during the summer between her second and third years of nursing school while working at Tozier’s Restaurant in Bethel, further tying her to the area. After graduating the three-year nursing program, Effie applied for a position at Gifford. Her first day was Aug. 11, 1967.

“There wasn’t orientation like there is now,” said Effie, who started as a nurse manager in obstetrics. “Randy Bradley was the first baby I helped deliver on my first day.”

Since that day Effie has remained a valued asset of the Gifford team and beloved member of the local community, in many ways embodying Gifford’s motto: “Caring for you, for life.” Looking back on her career, Effie said, “I think the only [nursing] position I haven’t held over the years is scrub nurse in the OR.”

She worked in obstetrics until she had the first of her three children, Joseph Morrissette. He and his siblings, John and Traci, were all born at Gifford. After her first maternity leave, Effie returned to Gifford as a charge nurse—“on old Ward A, sometimes old Ward B,” she said, for those who may remember the hospital layout of the 1960s.

Cardiac care came to Gifford in the late 1960s and with it, Effie learned new skills. She taught some of the first CPR classes at Gifford, and performed the hospital’s first-ever cardiac defibrillation. Inside, “I remember shaking like a leaf,” she said.

After taking leaving for the birth of her second child, Effie returned to Gifford in the evenings. She worked as a float nurse, “finally ending up in the [Emergency Department] most of the time,” she said. It was “a natural thing to go from [float nurse] to ER nurse.”

It was the 1970s, and more change was coming. “As a nurse, we weren’t allowed to start IVs,” Effie said of her early career. “That changed in the 1970s. I was terrified to learn at first, but became proficient at starting them.”

She learned, and she grew to “love the trauma in the ER” and each new challenge, finding her work in the Emergency Department at Gifford most rewarding. “I loved the ER. There were so few of us. Whatever needed being done, we did. The cardiac stuff didn’t bother me anymore,” said Effie, who also taught Advanced Cardiac Life Support.

More changes came in the late 1980s, personally and professionally. Effie had given birth to her daughter by then, and now served as full-time evening supervisor. At that time nurses also ran the pharmacy, which is where Effie first “had to learn the computer,” she said. “The pharmacy was the first part of the hospital to [integrate computers].” Effie experienced other challenges while working in the pharmacy: One of her colleagues, another nurse in the pharmacy, had a massive stroke while on duty.

“There are times you go home and cry—or we’d go in the back room and cry and smoke a cigarette,” said Effie of managing stress early in her career, when hospital policies were considerably different. “You learn how to cope. If you don’t, you either burn out or lose your compassion. And your patients know it. They know it the minute you step in the room.”

Effie offers this advice to nurses just starting their careers: “If you don’t love it, don’t do it. I never felt like I was at work—I loved my job.”

Fast-forwarding to 2004, Effie moved to Gifford’s Howell Pavilion, where she worked as nurse manager for surgery and transitional care for four years. In 2010, she earned her Certified Emergency Nurse specialty certification. And in 2017, she transitioned to an outpatient setting as a member of the addiction medicine team, where she remained until her retirement earlier this month.

Effie has taken in stride the many changes in nursing over the years, in areas ranging from smoking policies to technology. “Computers take up a lot more of the time, but they are just a part of adjusting to new ways,” she said. “It doesn’t matter where you put me—I learn how to do it.”

And while methods have changed over the years, what drives Effie hasn’t. For her, nursing is its own reward. “My greatest joy, my greatest honor, was to be at someone’s birth, or death. You hold someone’s hand as they go to the other side, or as they take their first breath—sometimes in the same day.”

It was while working in the hospital pharmacy that mutual friends introduced Effie to her second husband, Travis Farnham, who recently advised her that she probably won’t feel retired for a while yet. When not nursing, Effie, who has 11 grandchildren and nine—soon-to-be 12—great-grandchildren in her swiftly growing blended family, travels, fishes, and pans for gold with Travis. While retirement doesn’t seem real yet, Effie looks forward to taking more time for her hobbies and personal interests. “We’ve met some interesting people,” she said, while panning for gold. “And we take day trips. I like to read. I used to knit and crochet.”

What about babysitting all those great-grandchildren? “Maybe,” Effie said.

Guest Opinion: Think VT’s Wildlife Policies Are Formed in the Best Interest of Wildlife and the general public? Think Again

Guest Opinion: Think VT’s Wildlife Policies Are Formed in the Best Interest of Wildlife and the general public? Think Again