Get a Righteous Energy Boost from Ecuador

Get a Righteous Energy Boost from Ecuador 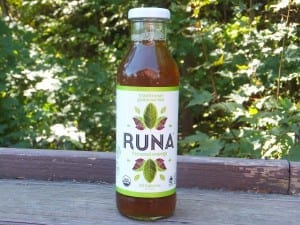 Vermonters with a fondness for tea, concerns about sustainability, a recognition of right livelihood or simply an appreciation of the glide they can get from the right amount of caffeine, should give Runa’s guayusa tea products a try.

Guayusa (gwhy-you-sa) is a perennial tree related to holly. It’s indigenous to the Ecuadorian Amazon Rainforest. Guayusa leaves have been brewed like tea for thousands of years. In addition to delivering as much caffeine per cup as coffee, the plant also contains theobromine, the stimulating compound found in dark chocolate, and twice the antioxidants of green tea.

Unlike coffee, tea (Camellia sinensis) or mate, guayusa does not produce tannic acids so there is no bitterness, rather a smooth, pleasant, earthy flavor.

Runa, loosely translated as “fully living human being,” was founded in 2009 by two Brown University students who became acquainted with guayusa while researching Kichwa Indian culture in Ecuador.

Runa LLC is privately held and operates for-profit facilities in Ecuador and Brooklyn, NY. It was Fair Trade-certified in 2011. The Fair Trade certification model is designed and audited to ensure transparency and equitable trade practices at every level of the supply chain.

Runa has a non-profit arm that provides resources for pursuing sustainable business. It currently supports more than 2,000 indigenous farming families and employs more than 40 people while striving to show how sustainable, high-impact businesses in the Amazon can support producers and connect consumers to ancient traditions.

Guayusa grows wild and tall, doesn’t require fertilization (although Runa does produce new plants from cuttings in nurseries). Because it is shade-loving, its production does not require clear-cutting. It is companion-planted with food crops, hardwoods, cacao and other local flora.

“Runa is taking market driven approach to conservation,” maintains Vermont sales representative Nick McCormick. “The mission is steeped in the product, so whether you buy Runa for the boost, the taste, or the ecological benefits, each purchase makes an equal impact in the Amazon. Subsistence farmers, who are allowed to invest in the company if they choose, are maintaining the canopy. Runa is dedicated to sustainable production.”

The company has aspirations of gaining market share with its newest product line – Runa Clean Energy drinks – available nationally in the slim 8.4 oz. cans familiar to many energy drink devotees.

Vermont consumers are being offered a bountiful variety of energy drink choices. It is a beverage category that has increased exponentially, nationally and worldwide, in the last five years.

Most energy drinks are essentially liquid stimulant concoctions loaded with caffeine and often, sugar. They are primarily targeted to young adults and teenagers who are looking for a pick-me-up if not a pick-me-up-times-10.

Legal and essentially unregulated, caffeine is the most widely consumed drug in the world. Runa’s caffeine content (120 mg) is naturally produced by the plant. No sucrose, glucose or caramel is added. Many energy drink products on the market add synthetic caffeine. As such, it must be included on the ingredient list.

The “average” cup of coffee typically contains 80-85 mg of caffeine. Darker roasts, despite their more robust flavor, generally are lower in caffeine – if you are brewing by volume, i.e. scoop or spoon per cup, rather than weight, because small amounts are lost during roasting.

Red Bull and Monster, the top energy drink brands by sales volume, generated nearly $6 billion in 2012 and will likely surpass Mountain Dew sales in 2013. Monster’s ascendance was so sizeable and rapid that it transformed its parent company, Hansen’s Natural fruit juices and soda. Sales of Monster energy drink went from $50 million in 2003 to $1.7 billion in 2011. In January, Hansen’s Natural announced that it would change its corporate name to Monster Beverage.