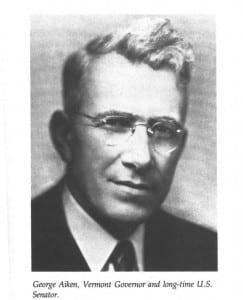 Vermont Democrats were not able to capitalize on the economic disarray and make make serious inroads into Republican power. Part of the reason was the leadership provided by George Aiken, who was a legislator, House speaker and lieutenant governor before running successfully for governor in 1936. Among Aiken’s strongest supporters were Sterry Waterman (later a federal judge), president of the Young Republicans of Vermont and Aiken’s 1936 campaign manager, and Ernest Gibson Jr.

Aiken shrewdly rejected the philosophy of the New Deal while accepting the money and benefits provided by many of its programs. He supported Social Security and recreation and conservation programs, and as United States senator, was the architect of the current Food Stamp program, which he saw as a way to help both the poor get food and farmers to sell it. Aiken did not oppose New Deal reforms simply because they were proposed by Democrats. But he did not like the way the federal government had become the dominant power in people’s lives. In his book, “Speaking from Vermont,” written in 1938, Aiken termed the New Deal a “tragedy.” He wrote: “Helping folks in their own homes, in their own localities, in a quiet and unobtrusive way, has been exchanged for a nationwide ballyhooed machine with its propaganda agents, its circus postern, and high-pressure advertising methods.”

After the 1936 election, one Vermont newspaper said that the nation “follows strange gods” and recommended that the national government “run excursions from the rest of the country into Vermont to show what a Republican looks like.”

As one of only four Republicans who were elected governors in the Democratic landslide of 1936, Aiken was thrown into the national spotlight. He had attacked the New Deal as “that visible and invisible government in Washington whose thoughts and actions are so alien to the free-thinking people of Vermont and of the nation.” He said the Roosevelt administration was an attempt “for more and more control of all of us and our possessions and resources, public and private.”

Toward the end of 1937, Vermonter Leo Casey, publicity director of the Republican National Committee, organized an Aiken presidential campaign. The high point was a nationally broadcast speech to the National Republican Club’s 1938 Lincoln Day Dinner in New York City. True to his candid style, Aiken began his radio address with a bombshell: “The greatest praise I can give Lincoln… is to say he would be ashamed of his party’s leadership today.” The speech was reported favorably in Newsweek and The Christian Science Monitor, but Aiken’s bid got nowhere. Wendell Wilkie won the Republican nomination, but then lost to a Roosevelt in 1940 when the popular president ran for a third term.

In many ways, George Aiken typified the Republican rule that had held sway in Vermont for a century. He was able to appeal to a wide range of Vermonters because of his strong, native ties to the state – his solid base of political support built over a number of years of service to the state – and his down-to-earth style. Aiken served six consecutive terms in the United States Senate.

When he finally retired in 1975, he was one of the most respected men in the Senate. He was the ranking Republican on the Agriculture and Foreign Relations committees. One of his greatest achievements was his fight for the St. Lawrence Seaway and its related power project, which brought to Vermont cheap hydroelectricity.

Aiken’s popularity was so great that he claimed he never had to ask for a vote. “Get into the community and find out what the problems are. That’s the best politics,” he said. When Aiken retired at 82, he said he would miss his friends in the capital, but not Washington. “I’ve never been at home in Washington… Home’s up on the mountains in Vermont where I always lived.” To Putney, and his orchards and wildflowers, he returned.

The NFL is Great, But it Could Be Better