Fish & Wildlife Urges Public to Be Bear Aware This Winter

Fish & Wildlife Urges Public to Be Bear Aware This Winter 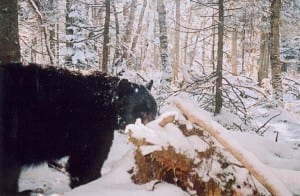 Bears have been spotted out of their dens this winter during stretches of rain or low snow cover. Photo courtesy of Vermont Fish & Wildlife Dept.

The Vermont Fish & Wildlife Department is reminding Vermonters that variable winter conditions such as lack of snow and winter rain may cause black bears to abandon their dens. Prior to the recent snow storm, the department received reports of bears at bird feeders, residential areas, and wandering the backcountry.

In one incident, a black bear killed a snowshoe hare hunter’s beagle in Elmore. Department game wardens investigated and believe the bear has likely found another den site and has gone back into its winter sleep.

“It is not uncommon for bears to be out of their dens in winters like this with so little snow cover,” said Forrest Hammond, bear project leader for the Fish & Wildlife Department. “Bears sleep soundly in winters when deep snow covers the entrances to their dens. But during years with little snow, bears are exposed and awaken easily.”

According to Hammond, winter rain events can make bears uncomfortable and restless, and may force many bears from their dens to seek drier accommodations.

Bears disrupted from their original den may produce makeshift nests of spruce boughs in dense evergreen thickets. Hammond recommends that hare and rabbit hunters should be aware of the potential for bears to be in these thickets and should not release dogs in areas where they see fresh bear tracks. While bears are generally docile animals they can sometimes become aggressive when they feel cornered or if a mother bear feels that her cubs are threatened.

“Hunters, hikers, skiers, and other backcountry travelers should steer clear of areas where they see bear tracks,” said Hammond. “This is a very difficult time for bears in which they are extremely vulnerable to disturbance and may be with newborn cubs.

“Last winter, a group of hikers investigated a bear den resulting in the sow abandoning her cubs, which soon died of exposure,” said Hammond.

With the passage of the Vermont Sportsman’s Act of 2013, Vermonters are now required to take nonlethal measures to protect property including livestock and pets. This may include removing attractants such as birdfeeders, garbage and pet food, or properly fencing chicken coops or bee hives.