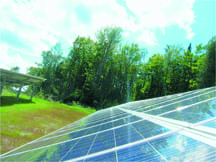 According to fish culture operations chief Adam Miller, the project will eliminate nearly 800 tons of carbon dioxide emissions as well as significantly reduce other greenhouse gases such as sulfur dioxide and nitrogen oxide. The project will also save the department more than $200,000 in energy costs over the life of the panels.

“The Fish and Wildlife Department is constantly looking for ways to make its operations more efficient and cost-effective for Vermont’s citizens, while also being good stewards of our environment,” said Miller.

The project is part of a long-term State Agency Energy Plan to increase the use of renewable resources in Vermont’s state government operations. Approximately half of the project costs were funded by a grant from the Vermont Small Scale Renewable Energy Incentive Program through the Department of Public Service.

In other energy-conscious efforts, the Fish & Wildlife Department is in the second phase of constructing a system at the Ed Weed Fish Culture Station on Grand Isle that will recycle heated water used to promote growth of trout and salmon during the winter months. This construction project has already conserved more than 35,000 gallons of propane, saving the station $56,000 in energy costs in two years. The department expects these latest updates will conserve roughly 40,000 gallons of propane annually, in addition to greatly reducing water consumption at the station.

Over a million fish are reared and released into Vermont’s waterways each year from the fish hatcheries, supporting fishing opportunities that have annually brought roughly $32 million to the state.

“These projects exemplify our commitment to creating greener facilities,” said Miller. “Between the reduction in greenhouse gases and the savings in energy costs, moving forward on these projects was an easy decision to make.”