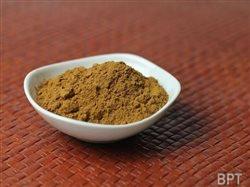 Cinnamon may be the world’s most popular baking spice, but all cinnamons are not created equal, and in the foodie world, Vietnamese cinnamon has emerged as the most prized of the bunch.

The bunch, by the way, includes an array of cinnamons and cassias, all from evergreen trees of the Cinnamomum genus. Some are from Indonesia, others from China, Sri Lanka or Mexico.

Dark reddish/brown and lushly aromatic, Vietnamese cinnamon is favored for its distinctly sweet, peppery, spicy flavor. Less tannic and more robust than its relatives, it delivers a powerful taste whether used solo – as in those gooey rolls or spirally bread – or in combo with other spices – in a curry or pumpkin pie spice blend, for example.

All that potency comes from an extraordinarily high volatile oil content – the highest of all the cinnamons about 1 to 6 percent, compared with .5 to 2.5 percent in other cinnamons. The high oil content also helps the flavor disperse fully; there’s no mistaking what spice you’re dealing with when you taste a dish seasoned with Vietnamese cinnamon.

Browse any assortment of baking recipes and you’ll find cinnamon in the ingredients lists for cakes, muffins, breads, cookies, pies, bread puddings, cobblers, crisps, and pastries. It also has a special affinity for fruits, such as apples, apricots, cherries, pears, bananas and citrus.

Cinnamon’s warm flavor also shows up in plenty of savory dishes – soups, sauces, chutneys, catsup, pickles, fish, meat and poultry glazes, as well as many ethnic recipes. Its pungent sweetness also enhances grains and hearty vegetables like carrots, squash, potatoes, beets and onions. In most savory dishes, cooks prefer Vietnamese cinnamon over other cinnamons because of its ability to hold its own alongside other lively ingredients.

When using Vietnamese cinnamon to spice a beverage – a hot cocoa, an eggnog, hot cider, coffee or tea – you might start by stirring it into your prepared beverage just a bit at a time. Once you nail your preferred amount, you can add it directly – right into your coffeemaker basket along with your ground coffee, your mulling cider pot or your tea blend, for example.

Here are a few places you might not have considered using cinnamon:

Here’s a recipe that shows off the vibrant flavor of Vietnamese cinnamon:

Slice pears in half lengthwise and core. Place in a saucepan. In a small bowl combine juice, honey, vanilla extract, cinnamon stick and raisins; pour over the pears. Cover and simmer about half an hour, until pears are just tender. Place pears on a serving platter. Blend together cream cheese, leftover cooking liquid and cinnamon powder. Spoon some of the mixture atop the center of each pear, sprinkle with almonds, and serve.

For a collection of seven savory recipes with cinnamon from various publications, visit www.theKitchn.com. Vietnamese cinnamon is available through Frontier Natural Products. They offer their organic Vietnamese cinnamon (5 percent oil) in one-pound bulk bags as well as 1.31-ounce bottles. This brand won the Gold Star Award from the restaurant industry publication Sante Magazine, who deemed it “a standout.”

Prepare your car for winter with these simple tips

Five simple steps to being a great pet owner

Five simple steps to being a great pet owner