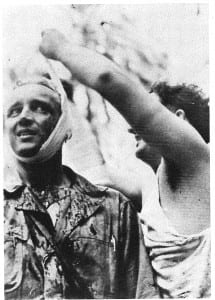 Ernest Gibson is treated for a head wound during a Japanese air raid in the Pacific during World War II.

George Aiken was succeeded in the State House by William Wills, and then in 1944 by the last of the Proctors, Mortimer. In 1946, Proctor was challenged by Ernest Gibson, Jr. Gibson was just back from World War II, where he had fought with distinction with the forty-third Division commanded by General Leonard Wing of Rutland. Gibson won the primary and general election.

In his inaugural address in 1947, Gibson placed great emphasis on the importance of education. He quoted Aristotle: “All who have meditated in the art of Government have been convinced that the fate of empires depends on the education of youth.” Gibson said “he was a devout follower of this philosophy who believes that the very existence of civilization depends upon our youth securing the very best education that is in our power to give.” Gibson felt the greatest problem facing his administration was “equalizing educational opportunity and distributing the costs as equally as possible among the towns and school districts of the state.”

With regard to public health he “advocated for annual physical and dental health exams for every school child and in addition fought for mobile health units with up-to-date laboratories, staffed by resident physicians and public health nurses.” One reason for advocating for the mobile unites was that 1 out of every 2 men in this state called to arms under the Selective Service Act was rejected. Gibson said the time had come to see this situation was corrected.

One of Gibson’s greatest accomplishments was the creation of the Department of Public Safety and a State Police force motor vehicle unit. For the veterans of World War II Gibson proposed a program of subsidized housing, preference to State employment and the hiring of disabled veterans.

Gibson also proposed “the creation of a Vermont power authority to transmit electricity from the St. Lawrence Seaway to sell directly to Vermonters.” Other Gibson objectives were conservation of natural resources, economic development and increased funding for welfare.

Gibson asked for what was then the highest budget in Vermont history, $31 million. To raise the necessary funds, he pushed for and won an increase in the state income tax. Gibson turned back a challenge from his lieutenant governor, Lee Emerson, in 1948, and served until 1950, when he resigned to become a federal district judge.

Baking basics are a recipe for holiday success