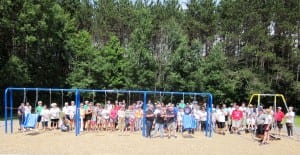 Members of the thirteen Vermont Elks Lodges and the Vermont Elks Association gathered at Silver Towers Camp for Exceptional People in August to open the new ADA compliant playground.

Bennington Lodge #567 is responsible for maintaining the grounds of Silver Towers Camp. In 2010, they recognized that the current pressure treated wood structure would need to be replaced. Lori Pinsonneault, from Bennington Lodge was elected Vermont Elks Association President in 2012 (first female president!) and replacement of the wood structure became her major fundraising project. What started as a swing set project quickly became a playground project.

Lori and her suite of officers visited all thirteen Lodges in Vermont and sold ducks (hundreds of them) at each visit. Ducks were also sold at the Vermont Elks Association mid-year convention, State President Homecoming, the Vermont State convention and Elks National convention. Most winners returned their winnings back to the project.

Donations poured in from businesses as well; Bennington’s Catamount Rotary, CB Telethon Fund (in memory of Scott Moffitt, a camper at Silver Towers), Wounded Warriors in Action Foundation to name a few. Each Lodge donated back funds that were raised from yearbook sales for Vermont State convention. 2013-2014 VEA President Keith Palmer also donated a large sum of money raised from his visits to all of the Vermont Elks Lodges. Private donations, proceeds from t-shirt sales and other donations brought the fund to almost $39,000.

Of that money, $29,000 was spent on two high backed swings, four seat swings and a wheelchair accessible ramp swing. The remaining funds will be used to develop a path around the playground, purchase outdoor musical instruments and place climbing rocks near the playground.

The Silver Towers Camp for People with Disabilities is the chief charitable project of the Vermont Elks Association, which has owned and operated Silver Towers since 1958. It is among the first of its kind in the United States, and still remains one of the very few.

An overnight retreat for those with mental and physical challenges, the camp demands more focused attention than others, and thus have a high ratio of counselors to campers to accommodate the special needs of the campers.