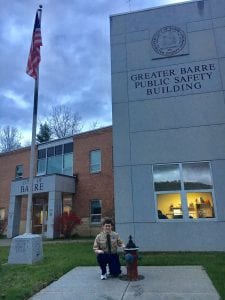 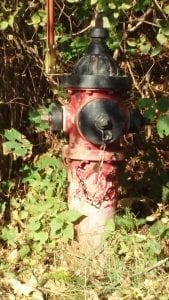 Sixteen-year-old Ethan Asselin has two missions: to make his community safer and to become an Eagle Scout. To accomplish both, he must be disciplined, committed, and pay attention to details. Plus, he will need a good winter coat. That’s because, for his Eagle Scout Project, Asselin is setting out to GPS the location of Barre City’s two hundred forty-one fire hydrants. Once he finds these hydrants, he will check them over, making sure that they have the proper equipment and that they are up-to-date. The uncertainty of a hydrant’s performance is a public safety issue. Fire Engines depend on accessing and utilizing the hydrants in times of emergency. When these hydrants are hard to find, or don’t work properly, fire fighters as well as the public may feel, and rightly so, a sense of insecurity. For example, early in October, a hydrant
erupted at the intersection of North Main and Blackwell Street, spewing water into the air and forcing locals to use bottled water until the lines were cleared. No one was hurt, and things returned to normal. But what if that particular hydrant had been needed at that time?

Many of the fire hydrants in the area also simply look like they need a little TLC. Their paint is faded, and some have even started dropping into the ground, or slinking back into shrubbery. This is what really sparked Asselin’s interest in the project. “We can make them look better,” he explains. Improving the physical
look, he continues, “lets the public know that there is something being done to make them safe.”

Fire hydrants have different colored bonnets and caps, and each color represents a different water pressure. Part of Asselin’s project is to make sure the water pressure matches the bonnet, and that the caps are secure. He also makes sure their chains are connected, the snow flags will be visible in the winter, and that the reflective tape shows at night. Plus, adding the hydrants’ location to a GPS system will help trucks find them easier.

Asselin, who is a student at Spaulding High School, started his project in September and hopes to finish it by the spring. This is one step, and a big step, towards becoming an Eagle Scout. This is the highest rank attainable in the Boy Scouts of America, and requires those seeking its title to perform a variety of skills. They must show leadership, community service, outdoor skills, and a solid foundation of values. Plus, Scouts must earn twenty-one merit badges, attain five ranks prior to Eagle Rank, and serve in a leadership role in Life Scout rank for six months.

Even doing a project like Asselin’s requires a fair amount of planning: he had to have it approved by the counsel, then approved by the beneficiary. When he is done, he will need to go before the board, who will review it and decide whether he has earned Eagle Rank. Planning also goes into the day-to-day of Asselin’s project. On top of checking the maintenance of the hydrants, he makes notes and takes photos of each to document it’s condition, location, and appearance so that a future Scout will be able to make the needed upgrades and changes.

Out of the two hundred forty-one hydrants located throughout Barre City, Asselin has checked fifty. Some go as far as the Hope Cemetery. That particular one wasn’t even located with the GPS unit, he had to go out looking for it. He also reports when he can and cannot find one.

So far, aside from broken chains and missing reflective tape, Asselin has not found any major problems. The strangest hydrant he has found was far out of Barre City, hidden in the shrubbery, behind a tree, with another tree growing around it, sinking into a hill. Overall though, “they seem to be in okay shape,” Asselin explains.

“They just need a little paint.”

Thank You CVMC for Being so Prompt and Responsive

Danger to Our Power Grid

Danger to Our Power Grid